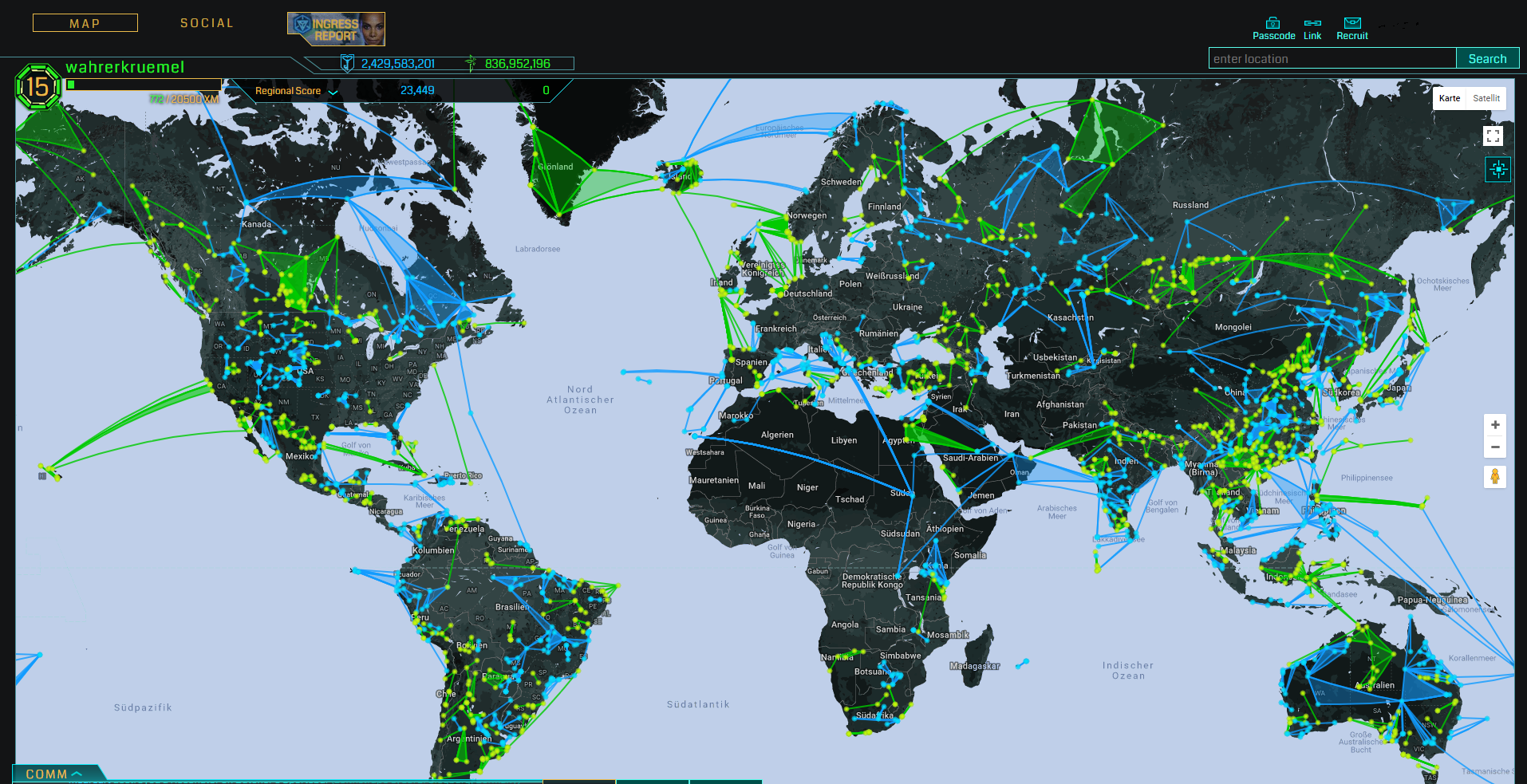 Ok, I admit it. I like computer games. Specifically those that have a more strategic or building theme. I kind of try to stay away from them at the moment because once I start playing I can really be drawn into the thing.

But there is a mobile game I am playing for quite some time now that makes me explore places that I otherwise wouldn’t have gone to. This game is called Ingress.

I am not going into all the detailed mechanics of the game in this post, because this is not essential for why I like to use this game during travel. There is more information on Wikipedia or in this video.

The general idea is that you need to walk around and capture so called portals. Portals are landmarks in the real world, submitted by players. To be able to interact with those portals you really need to be close to them. You can’t play this while sitting on your sofa. If you feel this sounds a little bit like Pokémon go, then yes, it is the same company that made both games.

Hey, what is this?

Sometimes I just start the game to see what is around me and I often end up with surprises. I will give you some examples.

When I was walking on the beach in France I saw some strange ruins. They looked like bunkers but their position was different from usual. I thought maybe somebody made a portal out of it and I was right. Ingress confirmed that those were bunkers. Ok. But then I saw two other portals on the map right next to it.

One looked like a piece of metal debris and I remember passing by and well, I thought about the pollution of the see. And that what basically it. So why would a piece of metal end up as a portal in game?

If somebody creates a portal they can add more information to it. In this case I came to know that I was not looking at a small piece of metal debris but that I was standing on top of a ship wreck that was sinking into the shore! I would have never thought of this! This ship stranded in 1938 with 497 Spanish refugees.

Once I was back at my trailer I googled for more information and got to know a lot more details.

I had been lucky on that day do even see the remains on the beach. 3 days later they were already covered again and disappeared to wait for the next storm that will bring them to light.

If you are curious to find out more about the Cantabria and you happen to speak French or use a translator there is a long article about its history here. Without the text still the pictures are interesting.

Back to World War II

What was now the other portal on the map? It happened to be just a information board, so not spectacular on its own. But it was describing the Atlantic Wall.

The bunkers I had seen had been part of a system of coastal defense built by Nazi Germany. And they were slowly sliding down the dunes. That was also why they were showing into a direction that made no sense. It was just not their original position at all.

Another example are street-lamps I came across while being in Dublin, Ireland.

Using a smartphone might make you one of those smombies (German abbreviation for Smartphone Zombie) and you only look on your phone and nothing else. But even if you are not using your phone you might not pay a lot of attention on what is above your head. Ingress made sure I look up when I saw this picture in the game.

And here it was, a lamp post with arms. How cool is this? I started to look out for more of those and the “creepy lamp” was not alone.

I didn’t capture that very well but on the right side the design is as if a parent is standing with her child and the child is waving.

Unfortunately there was no more information in the game about the background of this installation. It took me quite some time to find out that it had to do with the extension of the tram.

Those are two examples of how an augmented reality game made me see more. Of course I could have prepared myself better in reading more travel guides upfront but not all of what I found while playing would have been in there.

But there is jet another aspect of this game that I really like. It is a feature called “missions” and what the community made out of them.