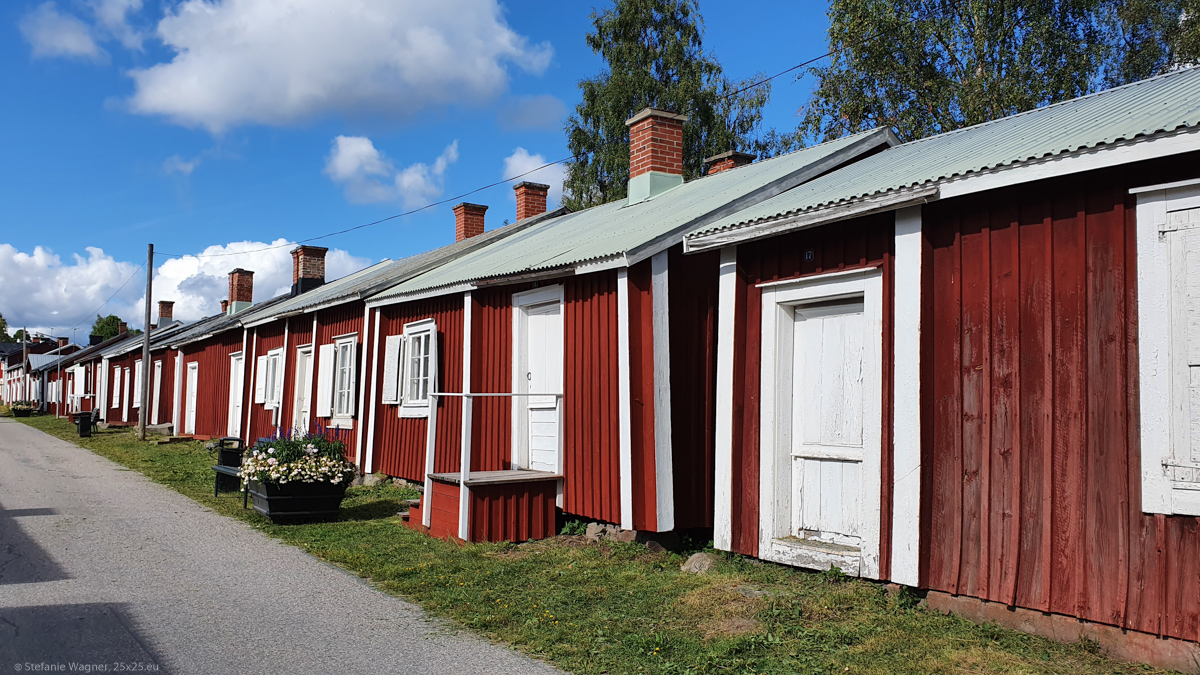 In the 14th century there were farms but not necessarily cities everywhere. Churches stood here and there, not every city had one. Still everybody was supposed to visit the church on a regular basis. The distances were too far to be able to arrive and leave on the same day. People had to stay somewhere overnight. This is why those tiny houses of the church town Gammelstad, most of them with just one room, came up. They surround the Nederluleå church.

Obviously, the time being there was also used for more social gatherings, trade, etc. It was a nice change from everyday life.

Just like in the past, the cottages are privately owned today. However, permanent living in it is not allowed. There is a maximum limit of 3 days at a time that you can stay here. I was told this is because they want to keep the original idea of the town.

I am not sure if anybody would like to live here all year long. The houses have no running water or toilets, but nowadays electricity. Central sanitary facilities are available. It seems like this church town has more to do with camping than I initially thought.

Where did the river/coast go?

A thousand years ago this area was more like an archipelago. The waterline was 10 meters higher than today and the church hill was only a small island in a river. Just as I learned at Skuleberget the land rose over the years after the ice shelf of the last ice age disappeared.

Next to the church town there was still a river bank. And on the other side there was a harbor. In 1621 the town Luleå was formally founded at the already existing marketplace. However, just after a couple of years in 1649 they figured out that the harbor had already become too shallow to be usable. So, they moved the whole town closer to the sea again. This is why there is Gammelstad, which means “old town”, now and Luleå is located to ~10 km to the South-East.

This is the view towards the previous riverbank. Not much river here.

This used to be the old harbor. The only remains of water are a lake close by.

When traveling through Sweden you will see a lot of red wooden houses with white doors and frames around the windows. Red for me is the color of Sweden and it is the dominant color in Gammelstad. I just never knew why they like red so much. A member of the visitor center told me that this is because this specific color was the cheapest color available. The internet gives more background into Falu red. It was not only cheap but also resembling the red brick walls of the wealthier houses.

So, what I just considered to be an iconic color used to be a decision for cost reasons. And when driving through newly build areas I mostly saw white and not red. Later on my trip I found out the reason for this change.

I know about box beds in the sense that you have them open during the night and closed during the day. They are mainly used to save space in small rooms. Here I saw box beds in a church house as well in one of the farm houses in the open-air museum next to the church town. And they were really different.

Here you sleep inside a cupboard. I was told this was mainly a solution for the winter when it was really cold and hard to heat the rooms. Sleeping inside such a cupboard kept you warm. Clever concept.

I followed a sign indicating some kind of landmark without any explanation what it would be. The path was difficult to find in the open-air museum and walked along the street.

I am not sure I appreciated it the way I should have. All I saw was a hole with very dirty water. Not very inviting. For anything. However, it is supposed to be a healing spring. Unfortunately, the information board next to it is in Swedish only with curvy letters and covered with dust. This made the usage of an online translator using letter recognition impossible.

I got to know later that the Swedish naturalist Carl Linnaeus discovered the healthy composition of this water in 1732 when he lived nearby. His landlord told him about the water healing both his gout and his kidney stones. Linnaeus did a lot of experiments and found out that the water from the spring was able to neutralize the large amount of salt that the northerners ingested through the food. Salt was used for preservation.

I got the feeling that the only thing it is healing today are mosquitos. The moment I was in the woods and did not walk mosquitos were all over me. I tried that out as I found the hiking path that I missed before. It is leading you directly through the forest back to the open-air museum.

I like the approach with the planks. This way the ground stays intact and it is not getting muddy.

There is this saying that you don’t own your cat, but the cat owns you. If you ever wondered – yes – you can travel also with a cat – or should I say “as a cat”?