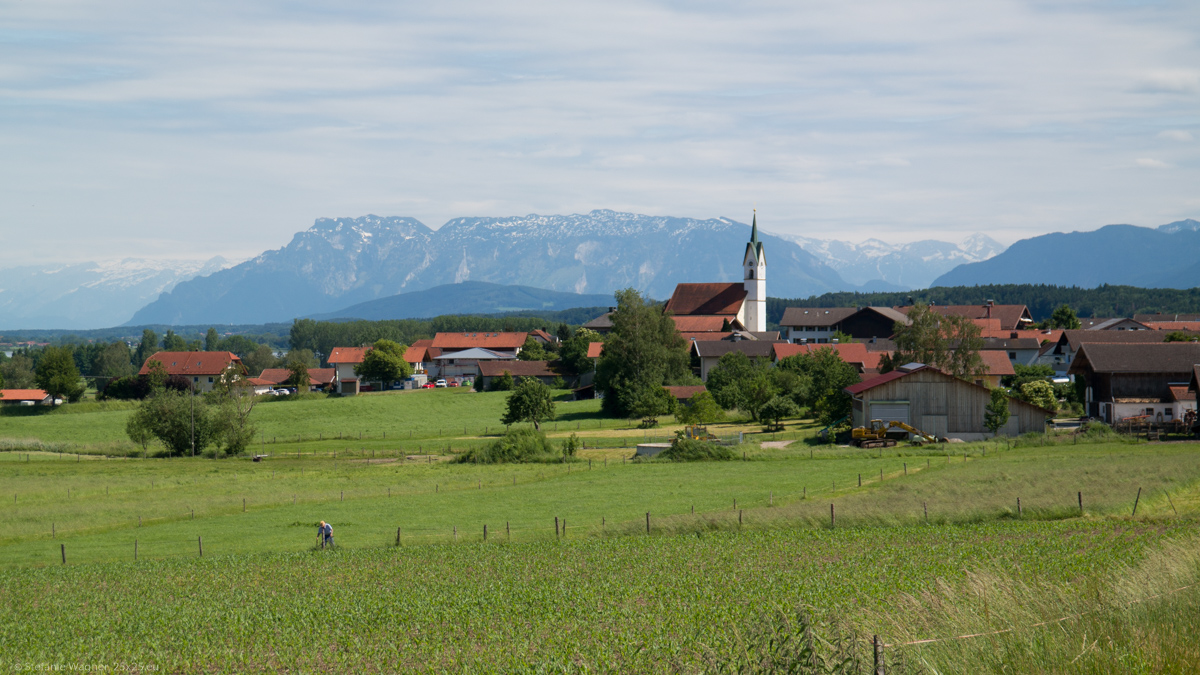 Sometimes it is important to just do nothing special and unwind. Visiting Waging was one of those occasions. No sightseeing, just cycling and walking around and some insights around bees and chickens.

Waging am See (which means “at the lake”) is actually not at the lake anymore. It used to be right next to it but in 1867 the decision was made to lower the outward flow of the lake which would also lower the water-level by around 2 meters to gain new land. Since then the lakeside is around a 600 meters away from the village. But the camping ground is right there on the lakeside which makes it a perfect opportunity for a walk in the evening.

By the way – the lake is famous for being the warmest lake in Bavaria.

During the day the area provides nice round trips for bike rides.

This house was built in the year Edison started working on the electric light bulb and the first phonebook with 50 entries was published.

The sound of bees

Typically we avoid being too close to bees and even though it becomes more popular beehives are not standing around everywhere. This apiarist though not only put the beehives next to the street, he also built one in a way that we can take a look inside.

“Why did the chicken cross the road?”

I have heard so many version of “why the chicken crossed the road” that I forgot what the original answer was. Plus I suddenly realized that I had no clue where this joke originated. The first finding is that if you don’t have anything to think about you really start thinking about very weird things.

The second finding is that it is more than 170 years old. It first appeared 1847 in a journal to describe an apparent conundrum which turns out to be none as the (original) answer is: “Because it wants to get to the other side.”

Another question that is of scientific interest is: “Why do men always ride in front and women ride behind?”. But this was a discovery made in a different quadrant during a long round trip.

Sometimes if things break they might at least show something nice. A lid of a pan decided to end its life in a big bang without any apparent reason.

As we were talking about phrases and their origins – do you know where the idea of shards bring good fortune comes from? Most probably not as it also seems that this phrase is something more common in Germany.

There seem to be two possible explanations. The first one is about driving off bad spirits as a part of old rituals. The second one is that the term “shard” in German originally meant pottery. In this context it would mean that (filled) pottery brings luck.

Next time you use a popular figure of speech and you don’t know where it actually came from, spend some minutes to find out its origin. It can be quite funny and interesting.