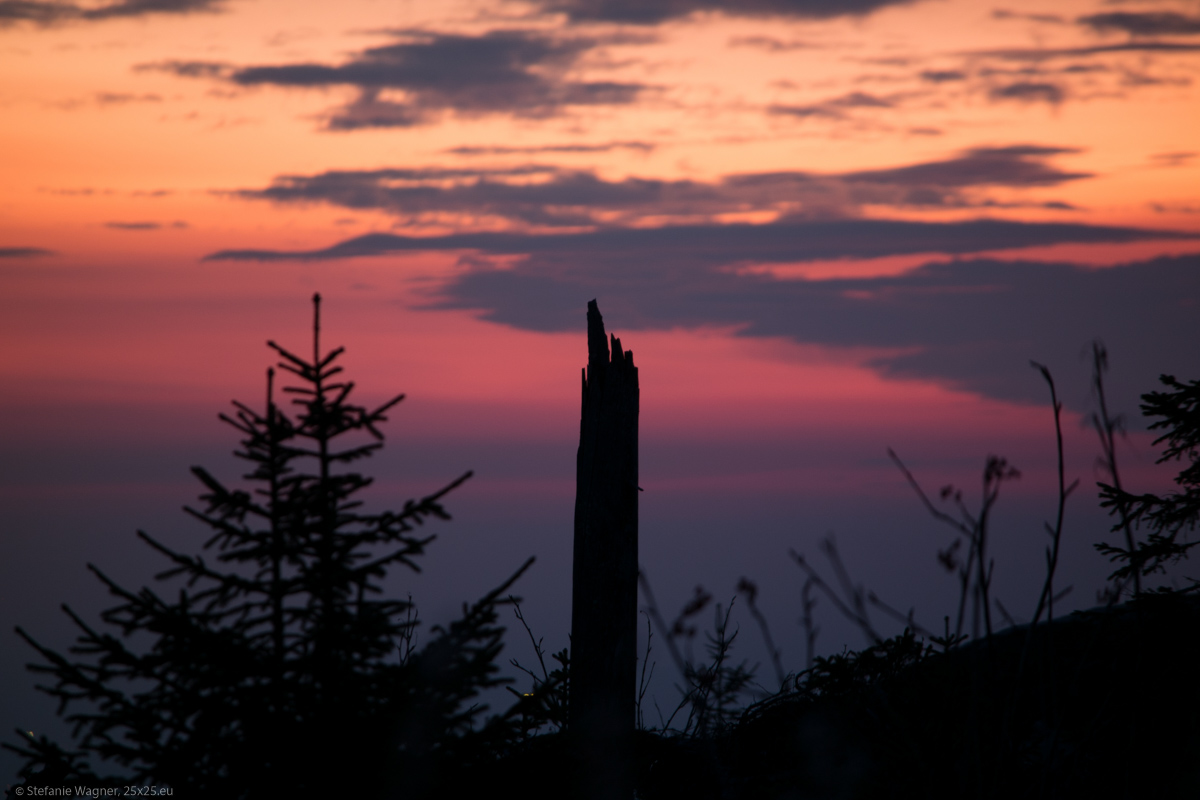 When you come above a certain elevation the trees will disappear. In the area of the Bavarian Forest something similar to this tree line can only be seen at the Großer Arber which is more than 1,400 meters high.

So what would you expect when you go out hiking in an area that is around 1,300 meter above sea level. A nice forest potentially?

Years ago you would have been right. But not today, not in the area of the Dreisesselberg that I was visiting on that day.

Being a national park

In the 1970s a big region along the German-Czech border became the first German national forest. Currently it is (together with the neighboring Czech Bohemian Forest) the biggest contiguous area of forest in Central Europe.

Between 1850 and 1969 almost all the natural growing trees were replaced by fast growing spruces to support the wood industry. So when the area became a national forest in 1970 there was not much left of the original structure. It took years for the silver fir to start coming back.

In 1983 a big storm destroyed a significant amount of trees. The decision was made to stop forest management completely and let nature take over instead of “cleaning up”.

This sounds very romantic and you would now expect some kind of a dense primeval forest to arise. But the opposite happened.

Menu is served for the bark beetle

Take a lot of deadwood and some hot summers and voilà you have the perfect environment for a bug called the bark beetle. It will drill holes to build tunnels and eventually, if enough bark beetles attack a tree, the tree will die.

Usually active wood management would fight the infestation but in this case the decision was made to just let it go. More and more spruces fell victim to the beetle. As the spruces made up a monoculture in that area, once they were gone, almost nothing was left.

Hiking in that area does not offer the experience of a pretty forest. It confronts you of with how weak monocultures are.

It was a brave decision to stop management in that area. Obviously it doesn’t look as attractive for tourists as a typcial national forest would.

But you can count on nature. It will always come back. It just takes time and you need to endure this period. The free space now gets occupied more and more by a strong, resistant and diverse forest. The bark beetle is almost fully gone and new life takes over. It will take a lot more years but our children will have a lasting forest again.

Even if it sounds like this is an unattractive area, be assured it isn’t. If you feel blue and you think you can’t bounce back check out this place and feel its power of endurance.

The legend of the three armchairs

This location has not only an unusual forest to offer. It also has its own legend.

The Dreisessel is directly located on the intersection of the borders of Austria, Germany and the Czech Republic. While hiking you can basically cross borders all the time. With the fall of the iron curtain and the European Union this is quite easy (means you don’t get shot or thrown into prison or get a fine).

It has granite rock formations with pillow-like shaped rocks.

One of them is quite large and you can climb on it. On its top you will find rocks that look like seatings.

The German word “Dreisessel” can be translated as “three armchairs”. The legend says that the kings of Bavaria, Bohemia and Austria gathered to negotiate the limits of their dominions. Sitting on each of the “chairs” will make you face each of the three countries.

This is really only a legend. No kings have ever been here. But that doesn’t matter. It still feels magical here.