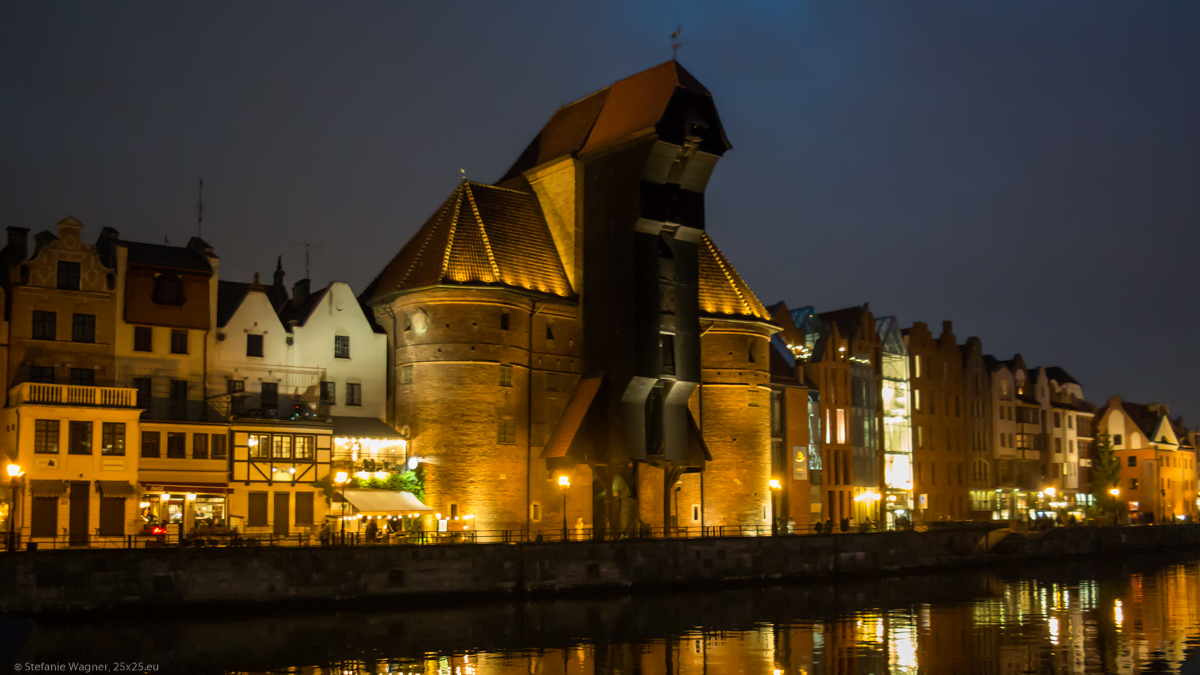 My family is rather small which is also due to WWII. The direct male side of my father was more or less wiped out: my grandfather, my great-grandfather, my granduncles, my great-granduncle. We didn’t talk about it much. I mean – we were the Germans, right? So how should we mourn? Maybe this is the reason why I am very interested to find out more about my family. So, my dad and I took a trip to Poland and Russia to follow the traces of his family.

The Stranger on the bus

Obviously you can take a taxi to get from the airport to the hotel but we decided to check out the bus. This took a long time though, that’s why we took an Uber on our way back. But the ride was very interesting. The bus was quite crowded and I ended up sitting to a Canadian who just came back to teach English in Gdańsk. It seems like he was not very comfortable with people, eye contact, etc. Nevertheless, for some reason we started talking.

It turned out that he wanted to change his job and location. He had two options: taking a camper van to go for the solitude of the wilderness in Canada, or moving to Japan to make music because Japan has such a melodic way. I think those are quite opposite options. Just remember: there doesn’t need to be similar options to choose from. When in doubt, think big.

The other interesting topic was the origin of words in English. His assumptions were that the similarities between “Hello” and “Hell” as well as “Germany” and “Germ” are not a coincidence. Yeah, I am not so sure that this is academically correct. However, those similarities might foster subconscious associations for some people.

Overall it was fun to talk to somebody who had totally different ideas in his mind. Something that I wouldn’t have enjoyed sitting in a taxi.

History ending on a parking lot

My grandfather used to be a doctor (even during war and when he died). He lived in Gdańsk, partially with my grandmother. We started to look for the hospital he used to work at and the apartment. We found the clinic but where the house had been located there is only a parking lot today. The other houses around seemed to be pretty old and from the old times. Bad luck that only this house was gone.

Nevertheless, it felt special to walk around where my grandparents used to go. I know it sounds cheesy, but it meant something for me. The first time I could somehow feel close to the man I never knew (and even my dad never met as we was raised an orphan).

Gdańsk was destroyed during WWII. It lost around 90 percent of its buildings due to fightings, and fires. This was unfortunately not unusual for cities during that time. But how do you continue? Do you try to wipe out history as Gdańsk was built by Germans and every building would remind you of that? Or do you try to preserve history because no matter who created it it is part of the DNA of the city?

Gdańsk chose the second path, whereas Königsberg/Kaliningrad went with the first approach.

Gdańsk has a beautiful inner city. Parts of it has been rebuild based on old pictures as much as possible. Parts of it are rebuild in a way that takes history into account but with a modern touch.

It is such a beautiful, vibrant city! A lot of people on the street, cafés, music, so much to see. I can only recommend a visit!

Why do we often feel more attached to old buildings? Why does it feel like new houses often don’t have such a kind of a “soul” and character? And why do we build in a way that feels rather “cold” nevertheless? How does the fact that houses are old inspire the identity of a city? If I compare Gdańsk and Kaliningrad I see so much of a difference. I think it was very brave of the people building up Gdańsk after WWII again to stick to their history no matter where it came from. I think this bravery paid off. The city felt so much more alive.

When we talk about Gdańsk we need to talk about WWII. This is where it all started. And as hard as it is to admin that, I didn’t know. I knew it started with Germans invading Poland but I didn’t know about Gdańsk’s history as a free city, the fact that a German ship pretended to be there for a friendly visit only to start a bombing, that there was a fighting at a post office. How could I have missed all of that? I read a lot, I had history as a subject until the very end of my high school and even during my final exams.

When I came home I took my old history book from my school days printed in 1986. I kept those because I wanted to see how history changes over time. And there it was. Or, let’s say, there it wasn’t. Just one line indicated the start of the war: “On Sep 1st, 1939, 4.45 am, the German attack on Poland started.” That was it. That was all my history book was telling me. Nothing about the preparation to get everything in place at Gdańsk. It wasn’t a coincidence the war started here.

I took a look at the history book of my son, printed in 2021. Again, just one line when the war started, nothing more. So, I could be disappointed that nothing has changed. However, it has. Even though there are not more historical details his book is full of material that invites reflection. Where my old book cites some dates and facts, his books gives a lot more background about the people, how this could happen, how indoctrination works, what kind of resistance one could provide, what one could do to prevent this. This gives me hope. And still it amazes me how less we get to know at school.

“The world is a great book, of which they that never stir from home read only a page.“ – Aurelius Augustinus.

To even go one step further we went to the Museum of the Second World War. It was an amazing experience. It was the first time I had the opportunity to get an impression on how the war was experienced by another nation. This was not a museum about arms and military. It is a museum about historical background information and what it meant for the people. It also links to other wars. Even though I couldn’t shake off the feeling that it was a little one-sided (there had been a lot of discussions around the museum and the original director got replaced to make sure that museum would account more for Polish heroism) it still was an eyeopener for me.

Poland had been “betrayed” by the western powers multiple times. It had been part of the secret protocol added to the Molotov-Ribbentrop Pact that would divide Poland between Germany and Russia. Great Britain and France had guaranteed Poland’s independence by the Anglo-Polish Agreement in 1939. But nothing happened when Germany invaded Poland. Poland had the highest percentage of casualties with 17.2 percent of their population. After the war they faced another dictatorial regime. I somehow knew about all of this, but I have never really understood what this meant for the Polish population beyond the facts and figures.

This visit laid the foundation for my future visits to a lot more WWII museums (e.g. in Norway). I can only recommend such museums to get a broader view on a very dark chapter of history. There is always something new to learn and, more importantly, to understand.