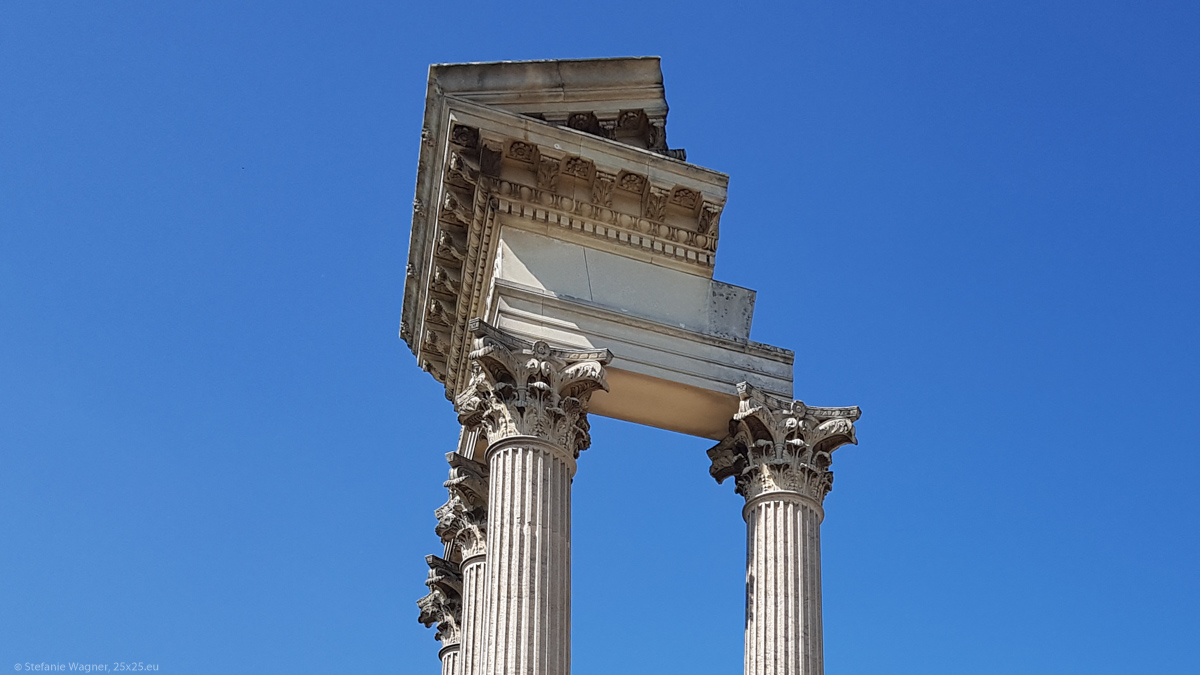 I am always amazed on how people were able to construct buildings more than a thousand years ago. And how those buildings are rediscovered and with them the life of the residents.

Colonia Ulpia Traiana existed around AD 100 until 275. After its destruction the smaller city of Tricensimae was built. But due to invasions it was also given up around 150 years later.

As usual the ruins where used as quarries and the buildings disappeared . But instead of establishing the new city of Xanten at the same spot it was built next to it. The roman town was forgotten but its foundations remained in the ground while the area was used as farmland.

The foundations were rediscovered in several stages. A farmer got stuck at the remains while plowing and the amphitheater came back to the surface (just imagine how that would feel if something like this happens to you in your garden). The construction of a state road let to rescue excavations and then more systematic excavations started nearby. Nevertheless, an industrial area was created and so buildings like the thermae got buried under factories and other structures. But this time they were not forgotten. Once the factory closed the city got hold of the area and the thermae was brought back to the surface.

Have you ever looked at the layout of cities and how they are different? Grown cities tend to be like onions. It all started with some area in the middle and then layer by layer more houses and more streets were added.

And then we have planned areas. You know that this area will become a (part of a) city upfront. So you take your ruler and draw the perfect lines to create blocks.

I know this kind of grid is more common in the US but for me it is still something unusual because our European cities tend to just be tangled. They start somewhere and then they grow, get rebuild, grow again, etc. This is why I consider it fascinating that using the drawing board is just how the Romans liked to do their city planning. Colonia Ulpia Traiana is no exception (another example I visited is Empúries). So since the archeologists understood where the streets had been they are now able to examine the ruins block by block.

And there is still a lot to discover. Until now (2019) not even all areas of the ancient city are part of the park because people live and do business there. It will be interesting to see how the park evolves over the next years.

When you think about houses 2000 years ago you might think of something very simple, ignoring the fact that there have been huge temples and colosseums at that time already. At least I have to consider myself guilty of always falling into that trap.

In this park they have rebuild one block of houses and they look pretty “normal”. Time to dump some prejudices.

Another prejudice is that ancient roman buildings where white. We all have those pictures of classical white temples and statues in mind. Kind of cool atmosphere.

However, this is not true. They used to be quite colorful until the color vanished over the years.

Just imagine how a roman city looked like with all those colors (if you need more input for your imagination take a look for example here). And what else do we miss today? What other misconceptions do we have about history?

One last fun fact: Xanten is the only town in Germany whose name starts with an X.