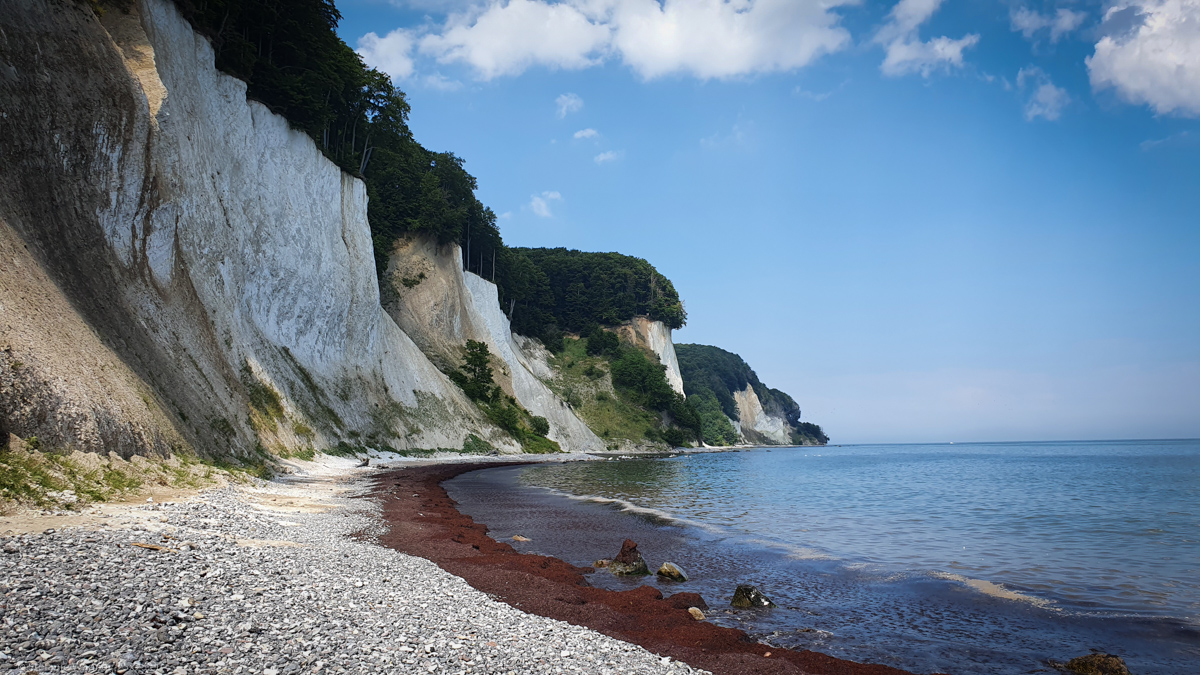 Ever since I saw Caspar David Friedrich’s painting of the Chalk Cliffs of Rügen I wanted to look at those cliffs myself. I like his paintings. For me they show a mixture of lightness and melancholy at the same time.

The chalk cliffs are part of the Jasmund National Park. They are subject to erosion which means what you see today might have already changed tomorrow.

This area is a favorite place of tourists (just like me). But what I didn’t expect was the amount of tourism. The entry to the hiking path “Hochuferweg” is the Königsstuhl, an very characteristic cliff. This is where busloads of people arrive, you need to pay an entry fee and they are currently remodeling the area to include a big platform. I skipped that part and went directly to the hiking path just to find out that people are waiting in line to get to some of the vista points.

But the more you carry on walking the less people will be there and you have the area almost to yourself.

Also the forest is very nice and calm.

At one point you can also use stairs to get down to the shore.

If you are taking the ferry to Sweden you have the chance to get a beautyful view onto the cliffs. Make sure you are on the left side of the boat.

Obviously there are birds in this area, sea birds you would expect.

Something that surprised me was to find out that swans also like sea water. Until now I had only seen them in fresh water. Spoiler alert: during my trip I was supposed to find out a lot more about animals and sea water.

By the way, did you know that the oceans have different levels of salt? The North Sea has an average salt level of around 3.5 percent whereas the Baltic Sea has a level of around 1.8 percent. I didn’t expect it to be that different. The reason is that the water of the Baltic sea initially came from the melting glaciers of the Ice Age and the salty water comes through the water of the North Sea.

I didn’t have any cell phone connection while hiking (Germany still needs to catch up with regards to coverage). I knew some weather would be coming but the sky was fully blue. At least the part I was able to see which was towards the East because the rest of the view was blocked by the forest. When I was down at the shore I saw one cloud coming over the edge and I though it might be a good idea to head back to the camper van. Families with small kids were playing at the shore around me and I was wondering if I am overly cautious.

I climbed back up just to hear the first roll of thunder already. Damn it. I expected rain but not a storm. I tried to find a shortcut back (I had an offline map with me) and started walking really fast. Well – didn’t work out. Rain was coming. And not just rain, but pouring rain. Like “standing in the shower” rain.

I had a rain cape which kept everything above the line of my knees dry. Lucky me. However, I found out that hailstones can really hurt even if they are small. I will be more alerted in the future when the forecast talks about hail and I plan to be outside.

Lucky enough the thunderstorm was not directly at our area so I didn’t have to beware of lightning.

People were rushing by the camping area without any rain protection. They were completely rain-drenched. I felt lucky that I only had parts of my stuff to dry and that I didn’t have to drive.

One of originally five megalithic graves is still visible today next to Nipmerow, a part of the Lohme. I must admit the explanations next to the stones were very helpful to understand what I was seeing.

The grave is from the early Stone Age. But there were additional burials later around at this area. They found some grave goods but nothing especially valuable, mostly ceramic vessels.

I always find it impressive that people without any advanced machinery could manage such heavy stones. And especially did that for the dead.

An glacial erratic is a large stone, usually lying around as a single stone. During the ice age they got transported by glaciers. When the ice melts and the glacier retreats, they remain as erratic blocks. One of those made it into the official emblem of the city of Lohme – the Schwanenstein or “swan stone”. It is right next to the harbor of Lohme.

You might need to have a lot of fantasy to imagine any connection to a swan. But here it is:

This rock is not too far away from the mainland. It looks like you could easily walk there.

Nevertheless in 1956 three kids died on that stone because they couldn’t get saved due to bad weather. They played on the frozen sea when a storm came that cracked the ice. They could reach the stone but nobody could them back from there. Multiple efforts where started without any success. The next day they could only be recovered dead.

This reminded me of how unpredictable nature and here the weather can be. Just some hours ago the bad weather caught be by surprise. Plus until then I had never experienced hailstones while being outside and was surprised that even quite little ones can hurt.

Next to Lohme there is also a chance to get a good view on the sunset at Cape Arkona. During this trip I wasn’t able to go there. But there needs to be something for next time.