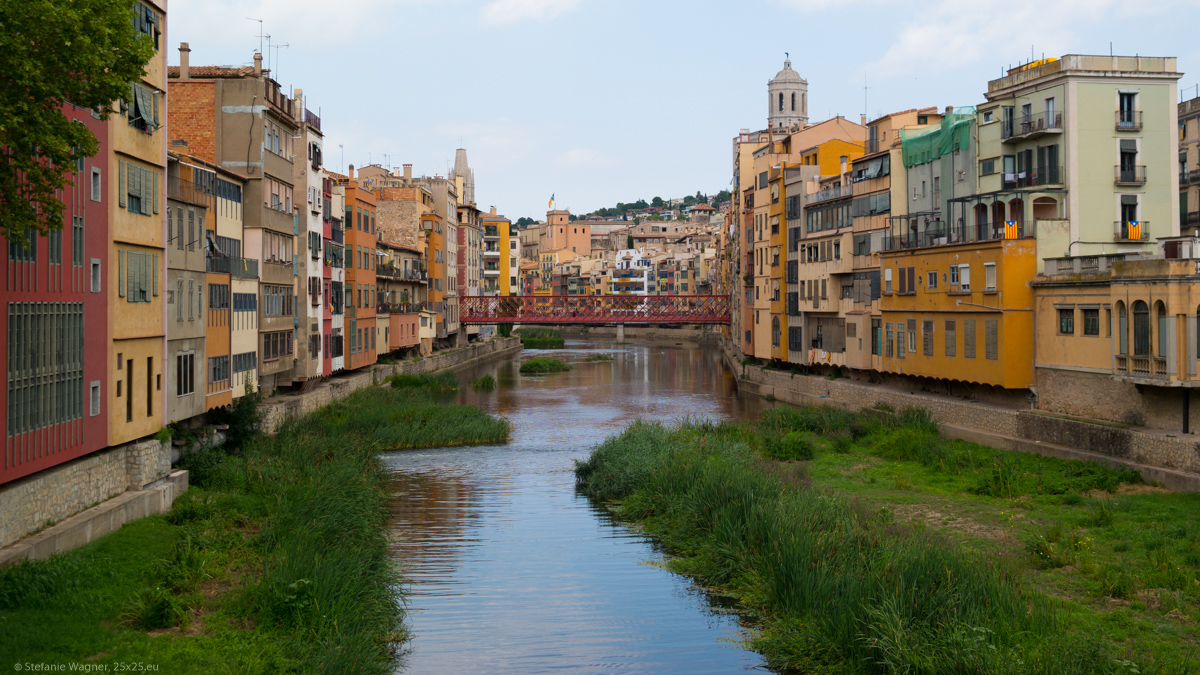 The good thing about having a trailer instead of an RV is that you can leave your kids at the camping ground and go for “boring sightseeing” on your own. I picked Girona, because it was rather near and I heard it is generally a nice city.

This was one of my not-at-all-planned trips. So I had no idea what to expect. Pro: you can’t be disappointed. Con: you find out some of the most interesting facts after you are home.

The city of graffiti

I started my way through Girona by playing Ingress and letting the game with its mosaic guide me. It took me to the not so touristic parts outside the old part of the city. This gave me the chance to see a lot of graffiti

What I didn’t know while visiting is that there is a project called “Milestone Street Art“. It is a yearly event that brings artists into the city and those graffiti are the result (see also reports here and here).

Some of them are art on houses.

Some of them are art on pillars.

Some of them are in various places and I am not even sure if they belong to the project or not. But they look fancy.

Color up your life

There is even more color around. The city center might be old and its predominantly color is brown and sandy. But the houses along the river Onyar are definitely of a different kind.

As already stated I had no idea what to expect in Girona. So this was an awesome surprise.

When you take a very close look at the houses you will see some signs of age though.

You cannot walk along the whole river but there are several bridges that cross from one side to the other.

The Eiffel company built one of those bridges, the red Palanques Vermelles bridge, in 1877. Which means it was built before the Eiffel Tower.

I have a confession to make: I have never watched a single episode of “Game of Thrones” and I don’t really plan to change this. Yes, now it is out.

If I would be a fan I would have obviously known that parts of the season 6 of this very popular story were filmed in Girona. And when you visit you immediately understand why. It is as if you would breathe history. You are thrown back in time. And compared to other cities (e.g. Carcassonne) the tourism doesn’t feel so overwhelming everywhere.

But as I am not a fan I found out about this afterwards while reading more about Girona. Thus I just enjoyed the various buildings and views without the corresponding reference to the series. I find it fascinating how the city changes with CGI elements after looking at some of the pictures online.

Beside the complications depicted in a TV series Girona has also some real political issues to offer. When you walk around you can see banners, ribbons, and flags everywhere.

Yellow ribbons (in this specific context) are used since 2017 as a sign of solidarity with political leaders as part of the Catalan independence movement. You could find them on lamp posts, statues, balconies, handrails, etc.

Catalonia has a long history in efforts to become a separate state. The last chapter so far is a referendum on independence in October 2017 that resulted in a turnout of 43% with 90% voting for independence.

Based on those results the parliament of Catalonia approved a resolution for independence. This did not make the Spanish central government very happy as they consider those efforts illegal. As a result leaders of the movement got arrested, the Catalan government was dismissed and new elections held.

Even though it was already months later you could still see the frustration about what is going on.

There is a longer history around the wish for independence than just the 2017 referendum. But the events become part of the cityscape. There is statue of a girl, born in Girona on the date of the ratification of the Spanish constitution, sitting at the “Constitution Square”.

This place is now supposed to get renamed to “Square of 1st October“. Plus a plate has been added, remembering the conflicts during the referendum.

This all made me think

When I grew up I saw the European Union growing, the Cold War ending, the world getting smaller. In a naive way I thought that we, while keeping our roots, would be able to slowly grow together into an even more peaceful era. And though there had been crisis on the way (e.g. the war in Yugoslavia) I thought the overall direction was just this.

It hurts me to see that right now we are rather enforcing the differences and not building on our commonalities. We are not able to deal with the confusing globalization and its economic impact. So we hope we can handle it better by going back to the smaller worlds.

Do you think this will work in the long run? Or are is this just operating on the symptoms instead of looking at the root of the problem?

Girona surprised me a lot. Thanks for that great day! Make sure you visit when you are around.