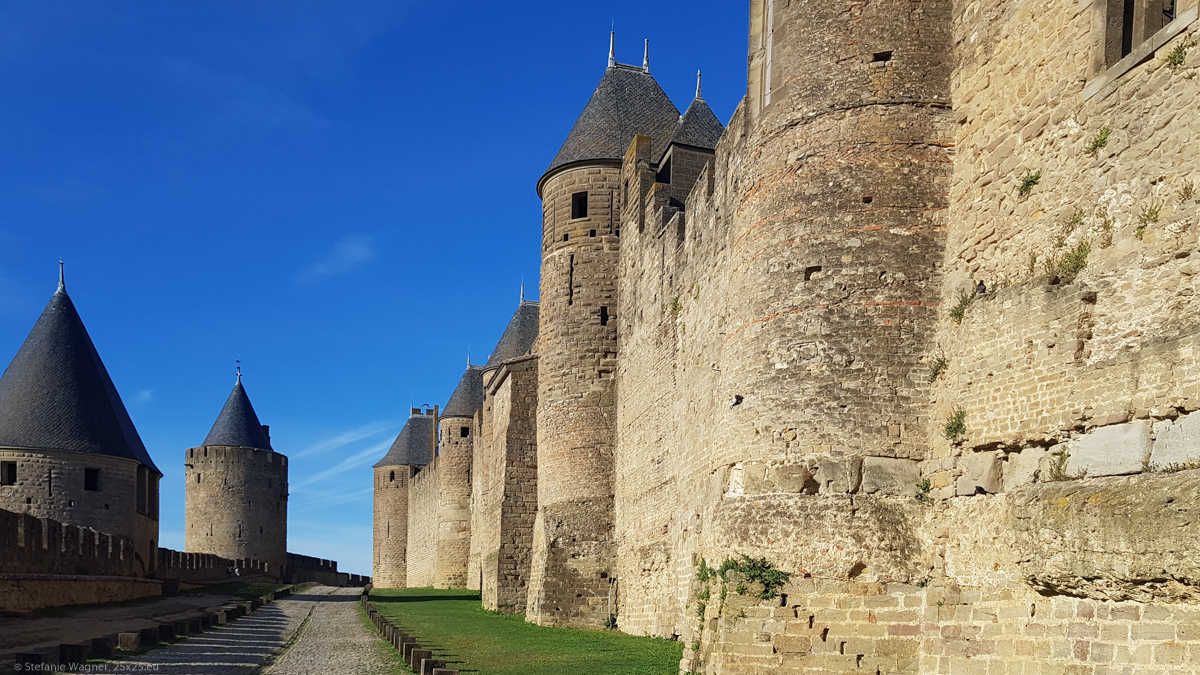 In 2016 we drove past Carcassonne on our way to Toulouse. I knew that there was some medieval fortress there (check out the board game with the same name) but I had no specific image. So when I caught a glimpse of it I immediately knew I had to come back. The towers, the wall, so impressive and “proud” on the hill – it was like nothing I had seen before.

In 2018 I planned it as a deliberate stop on our trip from Spain to France.

The Cité de Carcassonne is a fortified city. It has a 2,500 year history and was finally meant to be demolished in the 1840s as it was no longer needed as a defense system. The buildings had also been used heavily as a raw materials warehouse and therefore everything was in a lousy shape. But thanks to a local counselor with interest in preserving old buildings it was restored instead. Although the restoration was not exactly based on the historical facts but took many loans to the northern French architecture we can still be happy that it survived.

Carcassonne has a 3 km (1.9 miles) long double surrounding wall with 52 towers. It is impressive that you can still see the different building epochs in the walls. The foundation goes even back to the Romans.

It used to have around 4,000 inhabitants but today only roughly 200 people are living in the old part permanently. Every year around 2 million tourists visit the city. I assume you need to be patient if you live here.

We were approaching the camping ground and saw some yellow spots on the walls. No way, what is that?

You know this sentence: “Is this art or can I throw it away?” We are in fact looking at art here. Carcassonne celebrated its 20th anniversary of becoming a World Heritage Cite. The National Centre for National Monuments thought it would be a good idea to have something really special for that occasion. The result were yellow circles by a Swiss artist.

The people living around the city were not happy at all with this idea and even started a petition to get the circles removed. But with no success. This is why we came into the enjoyment of an optical illusion, which might look nice when you are standing at exactly the right spot. But in any other position it just looks like somebody made a huge mistake.

Good that it was only a temporary installation. My personal feeling: when I visit Carcassonne I am visiting it because of its medieval character and not because I want to see somebody putting color on it. I was disappointed not being able to get the original impression when entering the city.

Ok, the part with the “original impression” was pretty naive anyway. I didn’t take into consideration the huge amount of tourists. This has two consequences: it is hard to see anything in the street because there are people everywhere and there are two kinds of shops everywhere: food or souvenirs. You need to look up and use your imagination to get an impression of what this city might have looked like in the past.

Also present political situations catch up with you when you see a group of soldiers patroling through the street.

Fortunately our camping ground was in walking distance to the medieval center. Hence I visited the city three times – once during the afternoon, once with my younger son for a late crêpe in the evening and once in the early morning, before most of the tourists get there.

No matter how many tourists might be there – it is still a beautiful city.

I hate getting up early but in this case early just meant being in the city before 9 am. This is something even I can manage.

It is a bit like being in an amusement park before it opens. You see prep work here and there but somehow it appears a little lifeless.

What I know for sure is that I don’t want to be the garbage collection here.

It is really a beautiful city!

Overtourism – what should we do?

Carcassonne is so crowded in the summer that it is hardly fun to go there. If I would have the chance I would try to visit during off-peak seasons. I couldn’t do this due to the limitations of school holidays. Plus I must admit that I didn’t have any idea how full it would be.

My key takeaway from this visit is to do better upfront research the next time I am heading for an area that might be popular and rather put it on my bucket list for later when I am not bound to any peak season vacation.

Meanwhile there are at least 9,000 squares I can visit that might not be as popular as Carcassonne and still have a lot to offer.

My grandma used to have a habit. When she was traveling she always lit a candle if there was a church around. I continue this tradition. So we lit a candle in the Basilica of Saints Nazarius and Celsus during our visit in the evening.

Do you have some kind of a family tradition while traveling as well?