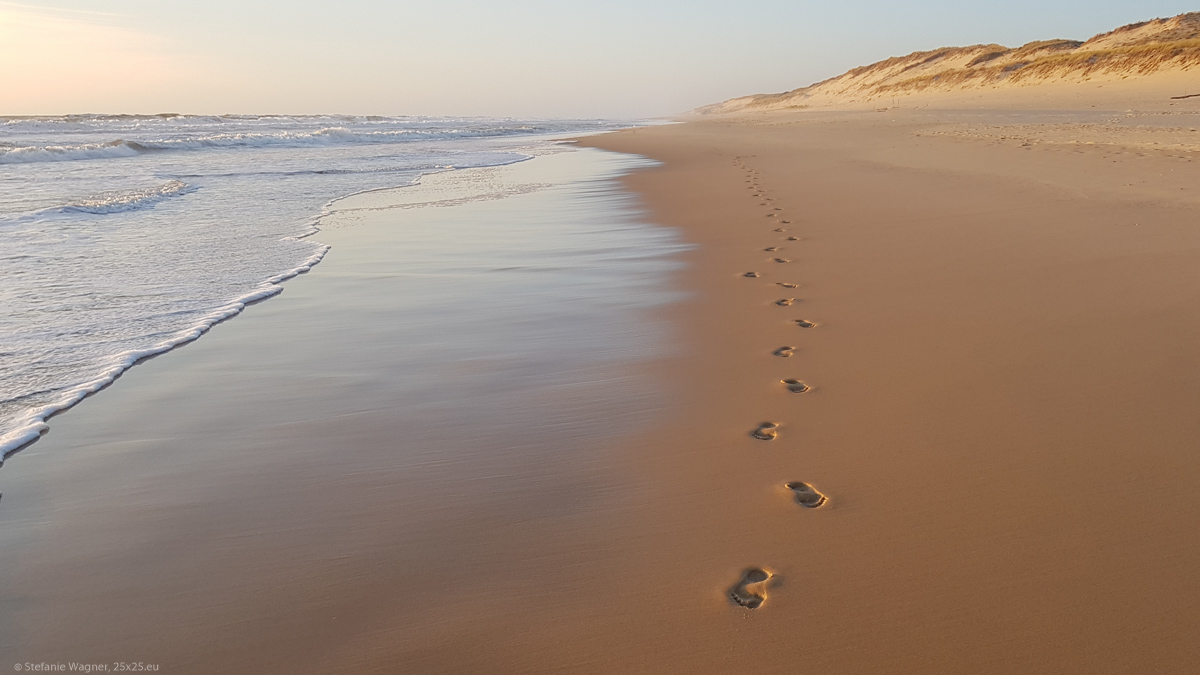 I love beaches, I love waves. As a child I used to be at the Atlantic Ocean almost every summer holiday and I would only leave the water when my lips turned blue. That is why this year I “forced” my kids to not just go to the Mediterranean coast again but see what the Atlantic is like (yes, I can be so cruel). Our specific destination was Lacanau-Océan.

I picked the location by choosing a camp ground that has direct access to the ocean and good ratings and wasn’t too far from our usual place in Spain. I didn’t look into much more details. It turned out to be so beautiful, I couldn’t have made a better choice. Sometimes you need to be lucky.

Traces in the sand

When you find yourself in a touristic hot spot (4.500 inhabitants, but in the summer it will host up to 60.000 people) you would usually expect a crowded beach. This was in fact true for the area where people would go for swimming. But the moment you turned away from the lifeguarded area and went north for a walk you would have it all to yourself.

Especially in the morning and in the evening you could be the only one leaving traces in the sand. You could enjoy the rhythm of the ocean, let your mind come to rest and relax. I have never been to a beach where you could go from crowd to be by oneself so fast.

Most of the times the waves were high enough to give you some action. They could kick you around quite a bit which I (and my kids) consider to be a lot of fun.

Due to the small sections of permitted bathing the other challenge was to avoid being run over by bodyboarders not capable of steering properly.

History in the sand

While walking along the beach I came across two structures that I could not identify properly at the beginning. They turned out to be old bunkers from the Second World War. They used to be on top of the dunes but over time slid down the slope.

The whole area was part of a project called the Atlantic Wall, a coastal defense system of the Nazis. Many more bunkers had lined the coast at Lacanau but had been removed by the officials (last ones in 2002). Even Rommel came to inspect the troops in 1944. It looks like there might be even more bunker remains covered in the sand that only become unhidden again after storms.

History below the sand

Speaking of only partially visible structures. While walking I noticed some metal debris and found out (by using an augmented reality game) that I was looking at a part of a ship wreck that was almost completely covered in the sand.

The Cantabria stranded in 1938 with 497 Spanish refugees. No one was harmed. The refugees could leave the ship on their own and were then supported by the locals (get more history and pictures here).

The ship could not be removed, so they left it and year after year it vanishes a little more. As you can see in the picture below in 2017 you could not miss the wreck.

Three days after I took my picture the remains were covered by sand again and nothing indicated the events that took place here. Now we need to wait for the next storm to uncover the Cantabria again.

The ongoing erosion of the coast puts a serious threat on Lacanau-Océan though. With every storm some territory is lost and eventually the sea will grab the houses on the shore (see an illustration in this video at 1:30, and here at 1:45). Every year the sea gains 1 to 3 meters. But during storms (like one in 2014) it could be also 20 meters.

Currently the village builds massive stone walls to keep its coastal line. But in the future it will need to give up its first row and relocate shops and apartments.

A sunset I could watch every day

Watching the sun go down eases my mind and makes me relax. Watching the sun sinking into the sea with this maximum of wideness had always been on my bucket list. And even though I had been on coasts a lot, the circumstances (wrong direction, headland, timing, etc.) prevented me to tick it off.

But this time the beauty could unfold.

And it didn’t do it just once. It did it many times during that week so we could go and watch it again and again.

The village of mansions

As I wrote at the beginning I didn’t put much thought into the location we were going to. This is why I was surprised by the neat little villa I saw when I took a walk to visit the village.

Soon I realized that this was not an exception but the rule. Those houses were everywhere.

It had been a deliberate decision by Pierre Ortal to extend the railroad and build this village as a beach resort.

After the approval of the plan the first villas were constructed around 1906/1907.

Next to Lacanau is a wildlife sanctuary. I decided to go for a hike. At this time I didn’t have a good backpack which means I just went without a bag. After a walk of around 6 km (~3.7 miles) I came to the entrance and discovered the following sign.

Which means I was so totally not prepared according to the recommendations. In fact it couldn’t be less.

I started to be a little concerned but overall it was an area with trees and shade and the ground would be mostly sandy. I gave it shot, mostly worried around mosquitos. But none of them showed up. Everything was totally fine.

There were wild cows enjoying their day (see the brown spots?).

Some other “wild” animals came around as well.

Plus just the pretty surroundings for hiking made it a fun trip.

On that day I cracked my fitness tracker high score (did jogging in the morning, the hiking trip in the afternoon and a walk on the beach in the evening).

Sometimes when you don’t plan upfront you don’t see much. And sometimes you discover more than you ever thought of. This spot is definitely worth a visit!

PS: By the way – if you like to surf this location is for you! Don’t forget to come here in August for the Lacanau Pro (check out some footage of 2018). We missed it but it looks like fun.