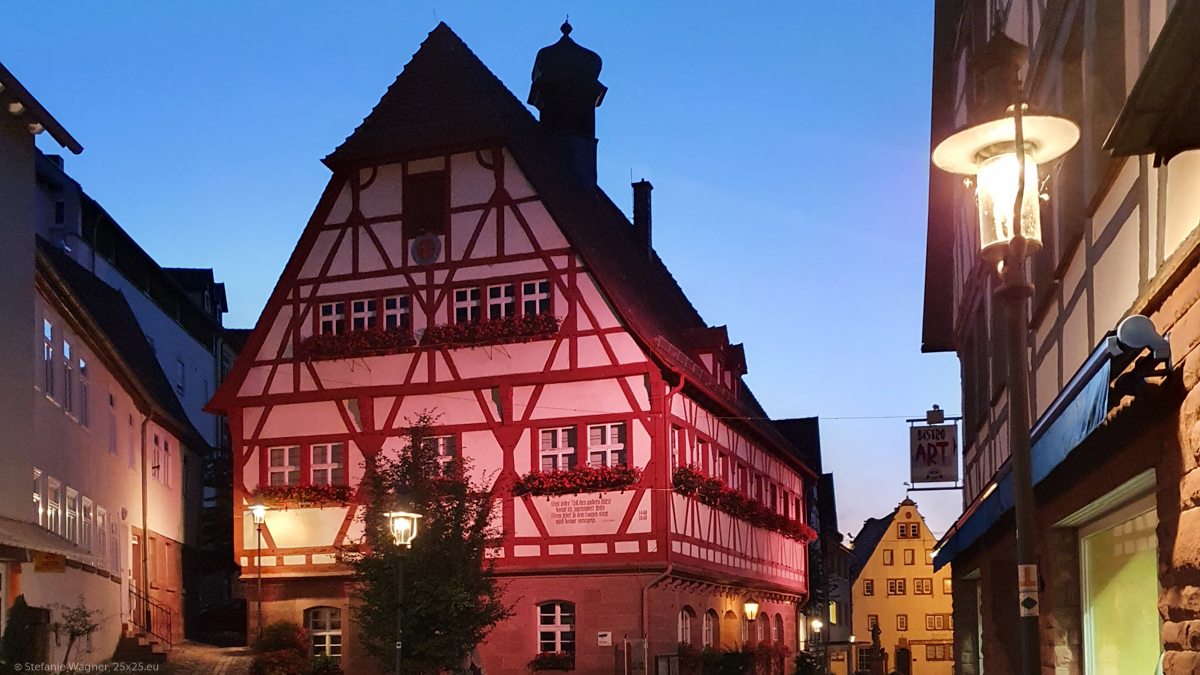 The color of a region

Sometimes regions have their own color, e.g. the color of soil and rock. And it becomes visible in the buildings. Even if you don’t know about it beforehand you suddenly recognize that something is different here. For me Walldürn’s special color is reddish brown. It is the red sandstone of the Odenwald that make up several of the buildings in this small town.

What is the color of your area?

Even though Walldürn is a very small town (~11,600 inhabitants) it has a very big pilgrimage basilica. The center of attention is a corporal (a linen cloth on which the Eucharistic elements are placed) that shows (or more specifically is said to have shown) images of Christ.

The story goes as follows: In 1330, during a Eucharistic celebration, the Walldürner priest Heinrich Otto overturned the already consecrated chalice. The shed wine (which is supposed to be the blood of Christ) then drew the image of the crucified Christ and eleven individual heads of Christ with a crown of thorns (Veronica) on the corporal. The frightened priest hid the corporal behind a stone of the altar. 50 years later he eased his conscience on his deathbed and named the hiding place of the cloth. The miracle (blood count) became widely known, and the pilgrimage began.

Until I did my tour guide exam for my own city (Passau) I wasn’t aware that the paintings and altars in a church can have a defined program that connects them. Now when I enter a church I start to see patterns I didn’t see before. For example: in churches the altars on the left and on the right side might have the same structure and material to connect them thematically. I got this “oh”-moment in Walldürn. Until then I thought this is only true for the main church in Passau.

So the next time you enter especially a baroque church look out for symmetry.

Another surprise I stumbled upon in Walldürn is its city hall. It is the oldest city hall in Germany where the mayor has had his official seat continuously since 1448.

Let’s set this into perspective. What else was going on during the century this city hall was built?

For me this is amazing.

It was a very hot week and a very hot day. My escape was into a wonderful limestone cave, the Eberstadt Stalactite Cave. It was discovered 1971 in a limestone quarry because a crack became visible after preparing for blasting. This kind of cave is quite unique in South Germany.

Beside the very beautiful formations there were three things that surprised me.

There is a barbed wire fence at a certain area because of people stealing unique formations that formed in water. Really? How egoistic is that?

They have one stalagmite that you are allowed to touch. It looks like it is covered with ashes. If we would touch all of those formations they would change their color. It was an impressive contrast.

The artificial light in combination with whatever visitors bring into the cave allowed algae, mosses and ferns to grow. They have changed the lightning and hope that this is going to reduce the amount of “lamp flora”. I didn’t even know that something like this existed. I didn’t see it in other caves. But might be they just hid it and cleaned it more?

Even if we don’t think we change much we actually change a lot.