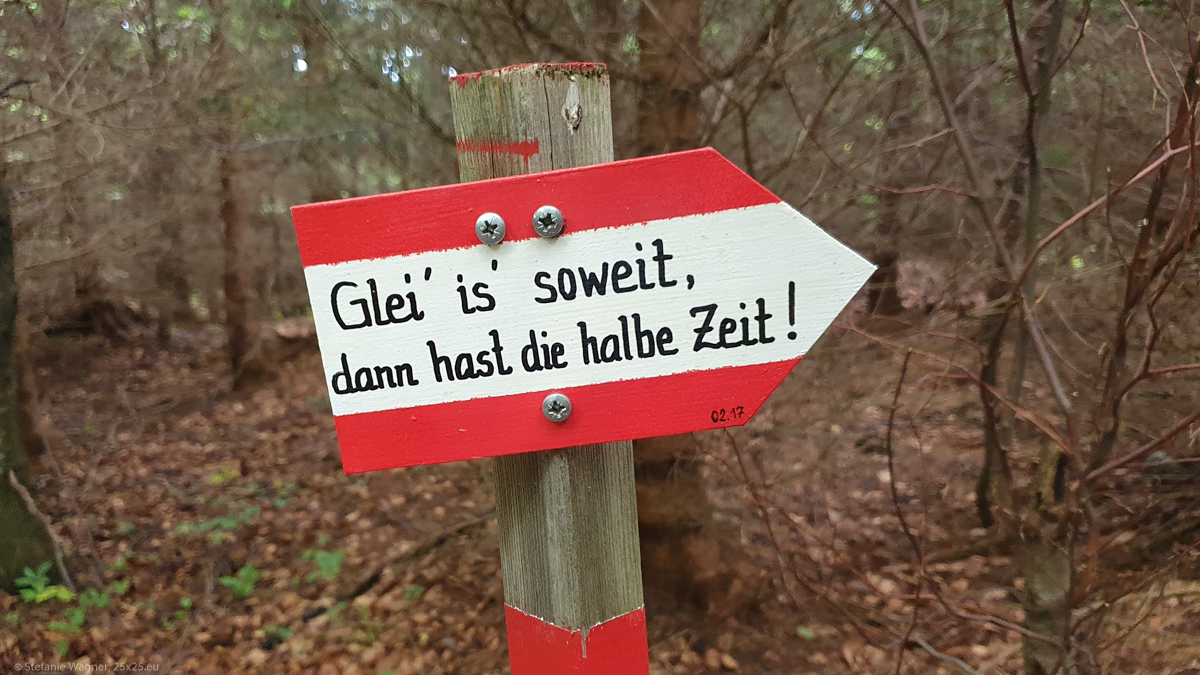 Time for another hike. The Hochsalm (1405m) is one of the most northeastern peaks in the Salzkammergut. However, from a hike perspective it is nothing spectacular. Nevertheless, it offered a different approach that could be used as an inspiration.

It all starts with a ruin, this time it is Burg Scharnstein. In 1538 the castle burned down completely “because of carelessness” and has been in ruins ever since. The most surprising thing about this ruin is that it is still there. Usually stones of ruins that are that old get reused in other places.

From here the trail to reach Hochsalm starts just as any normal trail. A path, a forest, some water.

The first hint that this is not one of the very normal hiking paths was a kind of supported crossing of a small creek that I have never seen before. Funny.

The red dots help to understand where you should put your feet. Very supportive 😉. At least they don’t tell you what to do.

Ok, this was what I thought. But next came another small stream, again some red dots, and a sign with the colors of the Austrian flag telling you to “jump across” written in Austrian dialect. This is cute.

First I thought this was just a funny exception. But soon there was another sign indicating (again in Austrian wording) that only around 500 m altitude difference remain (~1650 feet).

Why would they give this information? Because the path was very steep and not soooo inviting.

After finishing this part of the trail the next sign informs you that soon you will have half of the time. Sorry, it is difficult to translate it in a way that keeps the original impression.

A rather “normal” signpost reveals that I have reached the “last third” of the hike.

Thanks for telling me. Because again a steep path with even more roots. This motivational support was right on time.

At the end a steel cable gave me something to hold on to when the path got narrow and a precipice on the right was something I didn’t want to explore more. Whereas the signposts until here had a more supporting character they couldn’t resist to joke at the end. One of the final signs said “it can only be hours”.

The view at the end was great.

I have to admit, I took a more boring (means normal) path on my way back. However, I enjoyed the signposts a lot. They gave the whole hike a funny and motivational note. Small twists can make a real difference. Maybe we are sometimes overthinking things to make them special.