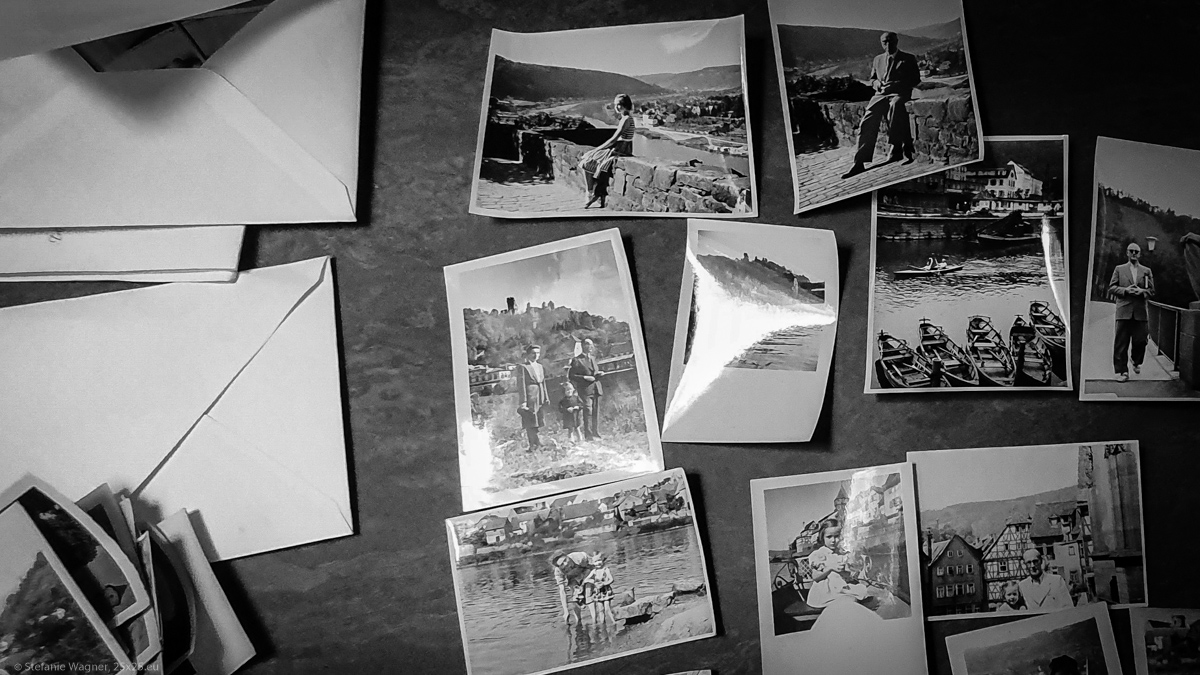 Going back in time

At some point in time we might get interested in where our parents or ancestors in general came from. The year before, me and my father followed the tracks of his parents and grandparents. This year I decided to visit the city in which my mother spent some of her early years, Wertheim.

Wertheim reminds me of Passau in muliple ways.

I think this is why the city “clicked” with me. Of course I also did some “normal” sightseeing here. But what makes it really special are the family connection.

My mum has some old pictures of her living in Wertheim as a very young child and visiting later when she was a teenager. I took those that had a identifiable background and started the search.

It was a great feeling when I found the first spot. This “I know my grandfather was standing here when he took this picture” was amazing (I never got to know him, he died before I was born). And it connected me more to my mum.

I ended up finding all the spots in Wertheim that we had a picture of with enough background.

It was a great opportunity to talk with my mum about her past and some of her experiences. I hope that there will be a post-Covid time when we can visit Wertheim together. 2020 was just not the year for it.

Almost all of the pictures I had chosen were taken directly in Wertheim. However, one of them was taken a litte further outside, where you can see the city only in the background. I made an assumption about where roughly this spot could be and asked google to give me walking directions. The destination was a little bit in the woods so I was not surprised that google would propose a path through the forest.

Now, somewhere there must have been a “higher force” knowing that this destination was wrong. So it decided to give me a hint that I should not proceed here.

This doesn’t look much like a path, right? At the beginning it was ok, even with some steps. But then it became like this. Yes, a good time to rethink. But as usual, I thought I just go on. Whatever it is, there should be a proper path coming soon. This long trail after the turn to the right (you can see it on the map).

I imagine my “higher force” sitting there and thinking: “What is she doing? Maybe I wasn’t clear enough?” So it put a tall stone wall in front of me. Instead of just being able to turn to the right the path was above me. I didn’t want to turn around though because the path I just came up was so bad. I decided to walk along this wall for a little bit to see if I could get onto the path nevertheless.

My “higher force” must have been shaking its head, adding a fence onto the wall to make it even more apparent that this is not the path I should be taking. But it probably overlooked the fact that I somehow like to crawl through the undergrowth. I ended up at a point where the wall plus the fence where just around 2 meters high and I took my chances to climb.

I succeeded. I am pretty sure I wasn’t showing the coolest performance while climbing the wall/fence but whatever – I made it. Now my “higher force” must have been really annoyed. “I want to help her, she is not going where she wants to end up. Why isn’t she listening to me? STOP!” and again blocked my way after the next corner.

Ok, this time I didn’t start climbing any fence again. I was more busy using some swearwords. There was a proper path to the right going downhill and I followed it. I didn’t want to risk standing in front of the next obstacle if I would try to continue. This sign must be there for a reason. I ended up at the main road and followed the next street uphill. And guess what? At the end of that street I was exactly at the right spot. I just couldn’t go the the stones where my mum was sitting on the photo because today it is fenced (yeah, a lot of fences around).

Did you ever go back to the spots of your parents?