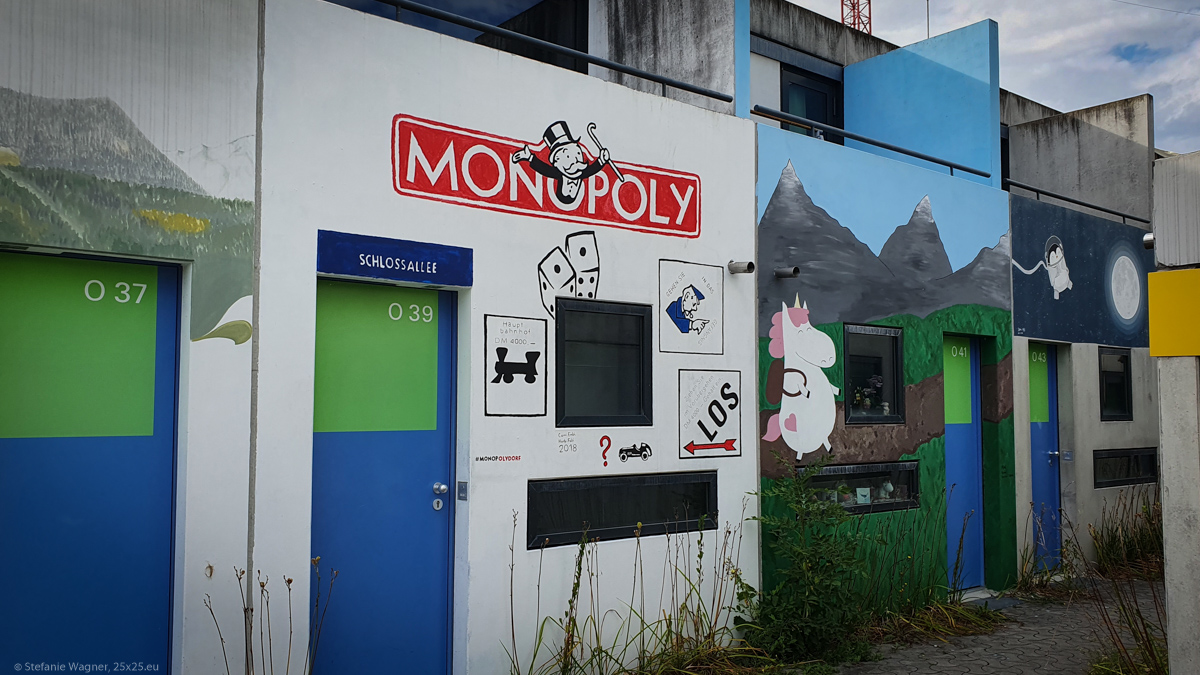 On this trip to Munich I was visiting a friend and we spent quite some time just roaming around.

Graffiti can be annoying or super creative. In Munich I found one of those spots where I can only admire the artists (just like in Girona) and I always wonder how they can do such things with spray cans. Below a bridge the columns have been used as canvases.

The Olympic Village of 1972

1972 Munich hosted the Olympic Games. The city built an Olympic Village for all the athletes next to the stadiums and I wanted to see how it looks like today.

The Olympic Village was an urban planning experiment. It was designed as a “city within the city” and should continue to perform all functions of daily life even after being used during the Olympic Games. As a result, in addition to apartments, there are also shops, schools, kindergartens, and cultural institutions in that area.

The “Media Lines” are a system of tubes (blue, yellow, orange, and green) that run through the Olympic Village and converge at central points. First of all the coloring serves as an orientation system. In addition it contains the lighting system. During the games it also had loudspeakers for communication and offered sun and rain protection in some parts.

Until here it looks like a slightly unusual but not totally different housing area in a city. However, what I liked most was the area that is used by students today. Instead of big apartment blocks there are small houses, a lot of them individually colored. Due to the Covid pandemic and the semester break there was almost nobody there but I can imagine that during normal summers it would be a very lively spot.

Could you imagine how our cities would look like if we would allow ourselves a little more creativity instead of having mostly houses in plain colors? Is it really that most people prefer this version or is it because we are afraid what others might think about us?

If I would make the decision to spend the money I would paint my house like a color explosion.

Germany doesn’t have a good track record of Olympic Games so far. The first one in 1936 was under the shadow of the uprising Nazi regime. 1972 had the attack of  a Palestinian terrorist group that took members of the Israeli Olympic team hostage. In a failed attempt to free them all hostages were killed.

I know that it happened but I was too young to really know much about it. We weren’t aware of it when we decided to visit that site but it was the anniversary of the attack, September, 5th.

They have a very good information pavilion between the Olympic Village and the Olympic stadiums. Videos explain not only the event itself but also what lead to it, embedding it into the historic context.

Additionally it makes it personal giving insights into the victims’ lifes.

Yes, this attack was evil. It killed innocent men who just happened to have a certain nationality. That makes the attackers evil. However, the questions remains what made them evil? I am sure they thought they were doing the right thing. It is not like a bunch of psychopath woke up one morning and decided to create a blood bath. The whole Israeli–Palestinian conflict creates a lot of people feeling their are loosing, on both sides. Some loose their loved ones, their safety, their land, their hope for the future. This fosters hate and hate kills. I doubt that I will see a solution to this conflict during my lifetime.

The not happening Oktoberfest

The German Oktoberfest is the world’s largest folk festival with more than six million visitors from around the world. It usually takes place during the second half of September and at the beginning of October. Usually. Because in 2020 nothing was at is usually was. Due to the Covid pandemic for the first time since 1949 the Oktoberfest was canceled. To help the affected businesses the “Summer in the City” festival spread rides and snack places across the city.

One of those places were here in the Olympia Park. Again we didn’t know about that. But we took the chance to have a beautiful view above the city and the very special roof of the Olympia Park by riding the Ferris wheel.

Usually I try to avoid being next to yellowjackets. But while having something to eat while sitting outside I got the very best opportunity to see how they nibble chunks out of what they are interested in and then fly away with it. They don’t eat whatever they find on the spot but are like a delivery service with the food in its original shape.

They really leave big holes in whatever they work on. This is quite impressive.

Ok, I have to admit, at some point we had so many busy yellowjackets that we decided to move inside to be able to continue eating. However, it was interesting to see how persistent they can be in doing their job.