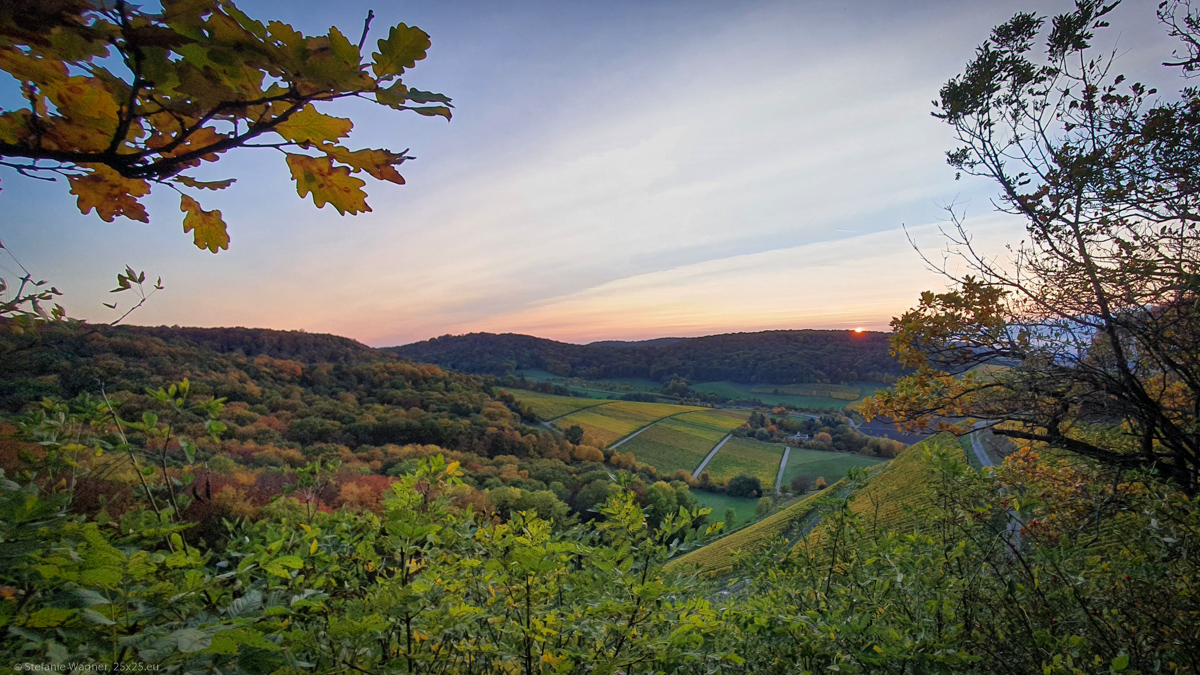 The small village of Castell is just next to one of the major highways in Germany. For 35 years I drove by without knowing that this is a beautiful spot and it offers a lot to learn about wine.

Visiting this area in fall is awesome. Not just the trees go full color but also the vines.

The first thing that made me curious was the different color of the vines. Those that already had changed their color were either yellow or reddish. So what determines the color? Even though the harvest was already over some grapes were still on the vines. Based on my non-scientific investigations I came to the conclusion that the color of the leaves depend on the type of grape.

The people around Castell have been cultivating wine since the early Middle Ages. The Franconian settlers probably brought the vine to the Main in the 7th century. Most of the vineyards in Castell were first mentioned in 1266. In the Middle Ages, the region was part of the largest contiguous wine-growing region in the Holy Roman Empire.

Throughout the vineyards they made quite an effort to put information boards about the different types of grapes and the impact of soil and location. For example, the steepness of the vineyard in a certain area with its southerly orientation and its inwardly curved shape lead to a bundling of warmth, which Pinot Noir needs. On the other hand the Silvaner doesn’t like a steep slope but a more moderate climate. Therefore, different types of grapes can be found in a compact area. Until then I thought it would just all the same.

The area belongs to the Counts of Castell-Castell. Yes, this is not a spelling mistake. It is really Castell-Castell. Why would somebody double their last name? Do they think that saying it one time might not be enough for people to remember? A resident who walked his dogs and with whom I chatted very nicely gave me an initial idea that turned out to be going into the right direction.

Names like that are created when a division of the lines happens. The main family line splits up in two different lines. Each line keeps the main name and adds a second new name to it. In the case of the Counts of Castell the lines of Castell-Rüdenhausen and Castell-Castell were created. Funny.

As you might know when you are reading this blog I hike a lot. But this was the first time I saw this: two chairs for hikers outside a normal home. No hotel, no shop, no restaurant or something else that would indicate some business benefit. It is just a very nice gesture.

How often could we make a difference with just a small thing like that. And we don’t do it because we think we would need to do big things for them to matter.

While walking I recognized rose bushes at some of the lines of vine.

The reason for having them there is that rose bushes are attacked by powdery mildew, a fungus, faster than grapevines. The rose bushes thus serve as indicators. If they show signs of powdery mildew infestation, the winemaker can react quickly and treat the vines. Due to modern pest and disease control measures, however, the rose has increasingly been forgotten as an indicator plant. Still they look very nice and I hope they will continue this tradition a little longer.

A little bit of magic

What looks like a normal pond is the “Gründleins-Loch”. The name comes from “Grundlos” which means baseless or groundless in German. Therefore it is a hole without any ground. Because you cannot see the source of this spring people thought it would reach hell.

One of the legends goes as follows: A Count of Castell celebrated his wedding in the halls of the old castle on the Herrenberg. Three virgins in white robes entered the hall and drew the attention of the guests to their extraordinary beauty. Many men wanted to dance with them and the party dragged on until the early hours of the morning.

When it was getting dark, the three women suddenly set out. When the rooster crowed and they were still descending the steep Herrenberg, there was horror on their faces. They quickly rushed down the mountain and, having reached the bottom, jumped into the Gründleins-Loch. The men with whom they had danced had followed them. As they looked into the water, a stream of blood came from below.