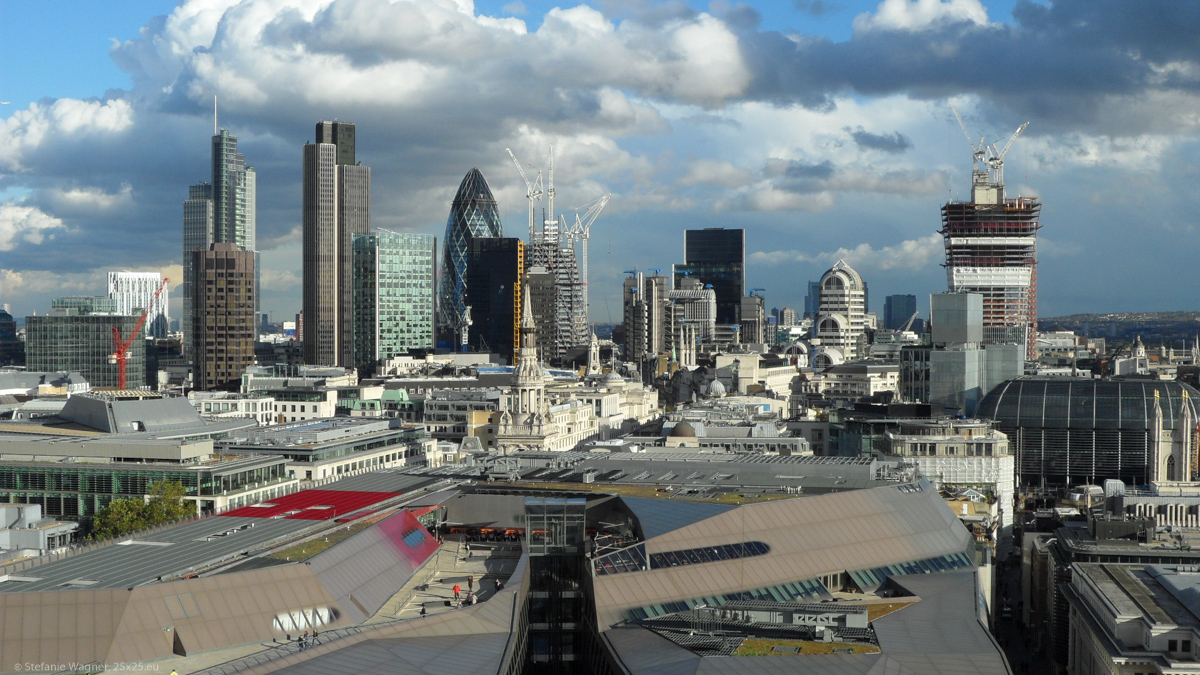 These visits already happened in November 2012 and February 2018 but I put it in my list as it was special enough that it “counts”.

London was the first city in which I saw people jogging home from work. At least this is what it looked like with the type of backpack they had. This is something I haven’t seen anywhere else. This goes hand in hand with the impression that this is a big city without (until now) behaving like a big city. It has around the same number of people living in it as the whole country of Austria. But despite this number it is still a nice area to go for a walk. Yes, there is a lot of traffic and it is loud compared to where I live. But e.g. in New York some time back (in the year to 2000 to be exact) I had to hide one day in Central Park to get accustomed. New York felt aggressive and hectic. Here it was as if London is inviting me.

I hope those open arms stay that way. In a lot of places it seems like large buildings are taking over, crunching the old city.

They all look pretty much the same: some steel and some glass, light sparkles. But as a human being I feel small in between them. For some this might be a motivation to go big. But for me it feels cold and distant.

While playing Ingress after my class (in 2018 I was there for some advanced training) I came around a lot of touristic places in the middle of the night. At midnight they are really empty. Empty in a slightly creepy way. You know those movies in which suddenly mankind vanishes and you are almost the only one staying behind? This is how it feels. Areas crowded during the day are deserted during the night.

Buckingham Palace was especially strange. There were a lot of barriers on the street. When I walked around them to reach the other side of the street I wasn’t sure if some police would jump out of nowhere. But nothing. Looks like those barriers were only there to regulate something during the day.

This city definitely sleeps at night.

I must admit that I don’t always plan my visits in detail in advance. Sometimes I just get surprised. This was also the case when entering the British Museum. There it was. Right at the entrance: the Rosetta stone. I had no idea it was in this museum. Seeing the stone that helped to decipher the Egyptian scripts was amazing.

Just think of this big secret, the scripts in the pyramids or on steles that couldn’t speak to us. And this stone helped to give all of those scripts a voice. Can you imagine how those studying the stone (and other artefacts) must have felt when they got the clues and saw the meanings of hieroglyphic script? I assume was excitement. It really feels awesome when you have a breakthrough and this tingling energy starts rushing through your body.

I remember some occasions where I was able to feel it. When I discovered hardware that had been stolen from one our clients on ebay and was able to help the police to catch the thief (those were the early days of the internet). Or when I was able to recover the data from a hard drive (with no backup) that had been formatted with a different operating system. When I found the exact locations of pictures taken from my mum taken in 1947 and 1948. I don’t know what the hormone cocktail is that nature hands you at this moment but it is a terrific one.