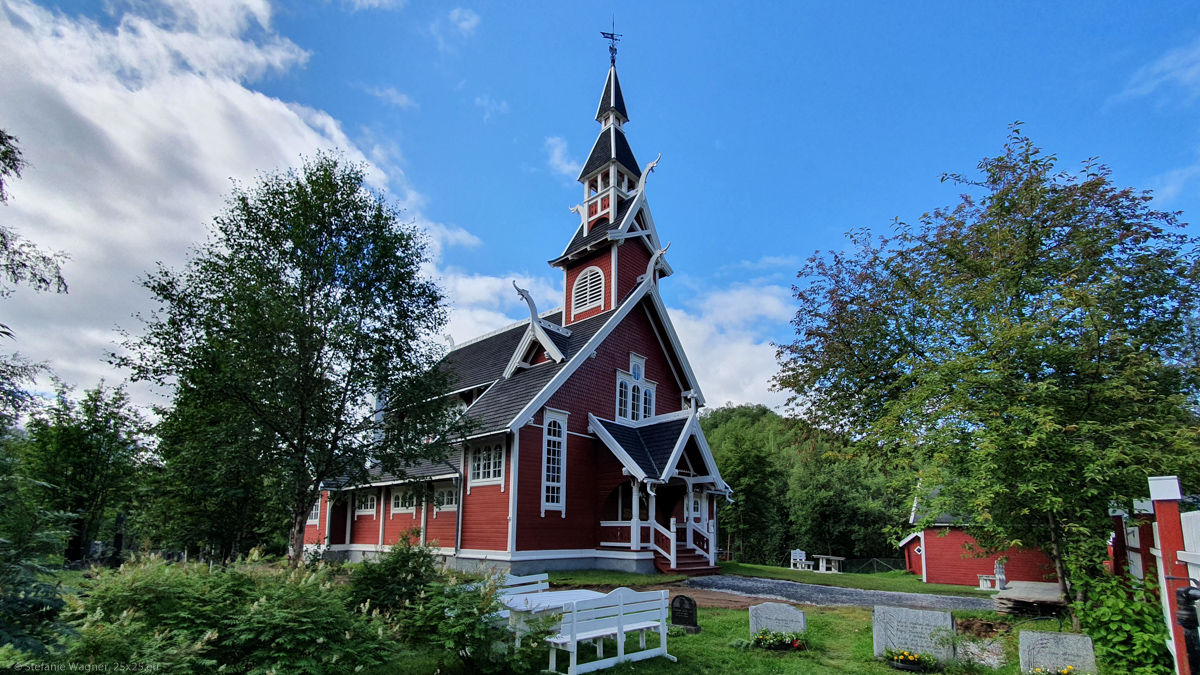 Sometimes you have those big things to discover. And sometimes they are smaller but nevertheless make you smile. Discovering cloud berries or seeing the first reindeer are examples for this on this trip so far. And here we go with another one.

I read about a very old small orthodox church and found it in an area called Skoltebyen in Neiden. Skoltebyen is the original settlement part of Neiden Municipality. It served as a temporary spring and summer settlement for the formerly semi-nomadic Skolt Sami.

During the 16th century Tryphon of Pechenga converted the Skolts to Christianity. Until today the majority of Skolts are members of the Eastern Orthodox Church. The very small St. George’s chapel was built in 1565 by Tryphon. The building looks pretty good for being more than 450 years old. But I suspect that based on what I learned about the modular principle while visiting the Sámi museum in Inari it could have been easily repaired over time. So might be, parts of it are not that old.

This building is another example for me that churches don’t have to be big. They just have to be important to the people.

The chapel is surrounded by a graveyard. However, it is unknown how big the graveyard used to be. When I visited there were just some crosses. But at least one had flowers. So somebody still cares.

While this Orthodox church was surprisingly small, this church was surprisingly big for a town with only 250 inhabitants. I would learn later on a little more about the size of churches in Norway that explained it a little more. When it was built in 1902 this was not to have a place to worship but also for political reasons. It should help to norwegianize the area of Eastern Finnmark against the Finnish-Russian expansion.

Like almost all the other buildings the church is also made out of wood. The basic construction is that of a stave church. However, the dragestil makes it special. Using elements of the Vikings like dragon figures this style supported the striving for an independent identity in art and culture at that time.

My first “waterfall” in Norway

Ok, I admit it. This one is rather small. Rapids would be the more appropriate description. However, its name is Skoltefossen – and “fossen” means waterfall in Norwegian. Which means for me it counted on that day. It is located on one of Norway’s most salmon-rich rivers.

According to an information board it is a tradition to do salmon fishing using a net here once a year. This type of fishing is called Käpälä. I read later on that not everybody is allowed to do net fishing. Only those who live permanently in Neiden and own land in the neighborhood of the river can participate. I hope that this will keep the population of salmons protected from being overfished.

When continuing to drive suddenly a big wide area opened up. It was just so surprising and so beautiful I make a spontaneous stop. It turned out to be the protected area Færdesmyra. Besides looking awesome the information board told me that I am in an area with permafrost soil.

So called palsas are common here, peat mounds with a permanently frozen peat and mineral soil core. They are visible as little bumps. I couldn’t see those from the distance. But having heard “permafrost” only as part of my school curriculum it felt great to finally be in such an area.

Reindeer became more often by now. Here I saw a white mother with her offspring.