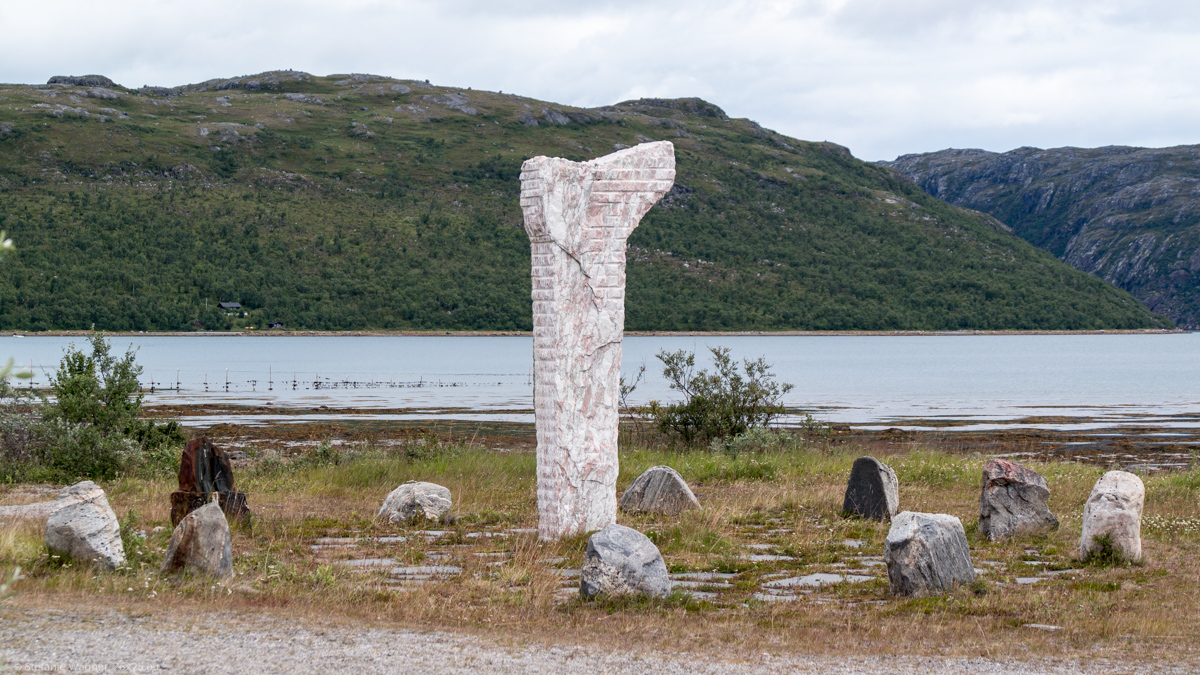 This trip was really about seeing what comes along and live in the moment. Of course, I also took a look in the travel guides and on websites what would be in the area. But, I also took the liberty to stop whenever something sparked my interest.

Here it was the sign to a monument with a name I had just seen in the museum in Kirkenes. I knew he was a Sámi artist. But not much more. So, I followed the sign to see where it was taking me.

There was not much information at the site itself. In a small hut there used to be more information. But most of it was already gone. The only sheet of paper still partially available was in German, which gave some introduction to Savio’s childhood and early years. However, no information on the monument I was seeing.

Therefore, this was more of a discovery once I was back home and worked through my pictures again.

John Savio was the first Sámi artist with a formal arts education and grew up in the city right next to the monument (Bugøyfjord). Wikipedia says he was also born here. But the lonely piece of paper at the site stated that he was born in Kirkenes. He lost his younger sisters both during their first year of life, the mother died when he was 3 years old, the father drowned when he was going by boat to Vadsø to get her coffin. This brought him to his grandparents who lived in Bugøyfjord.

The monument was not done by Savio. He was mainly doing woodcarving and paintings. It was erected in 2004 in memory of Savio because he grew up here. It depicts a shaman drum hammer. Unfortunately, the area is not that well maintained. A pity, given the fact that it is to honor a pioneer.

Reindeer and the sea

While looking around the Bugøyfjord (yes, the village and the fjord share the same name) I saw reindeer happily at the shore. Looks like seaweed is something they like. So up until here I learned that swans, cows, and now reindeer have no issues with salty water.

As much as I didn’t expect reindeer at the sea I knew that aquaculture of salmonids is a big thing in Norway. When I was a kid salmon used to be something very special and only for rare occasions. Today it is in every supermarket and most of it in my area comes from Norway.

Seeing those farms for the first time in a fjord (in my case Varangerfjord) was impressive for me. I would see them in a lot of fjords from there on. There are ships with tubes for feeding the fish. This and the nets are the indicator whether or not the farm is currently in use.

Similar to the way that we don’t see factory farming of pigs and chickens, as everything happens behind closed doors, one can also not see below the waterline how packed the fish grows there. I would try to get more information about it while being in Tromsø but I would only partially succeed.