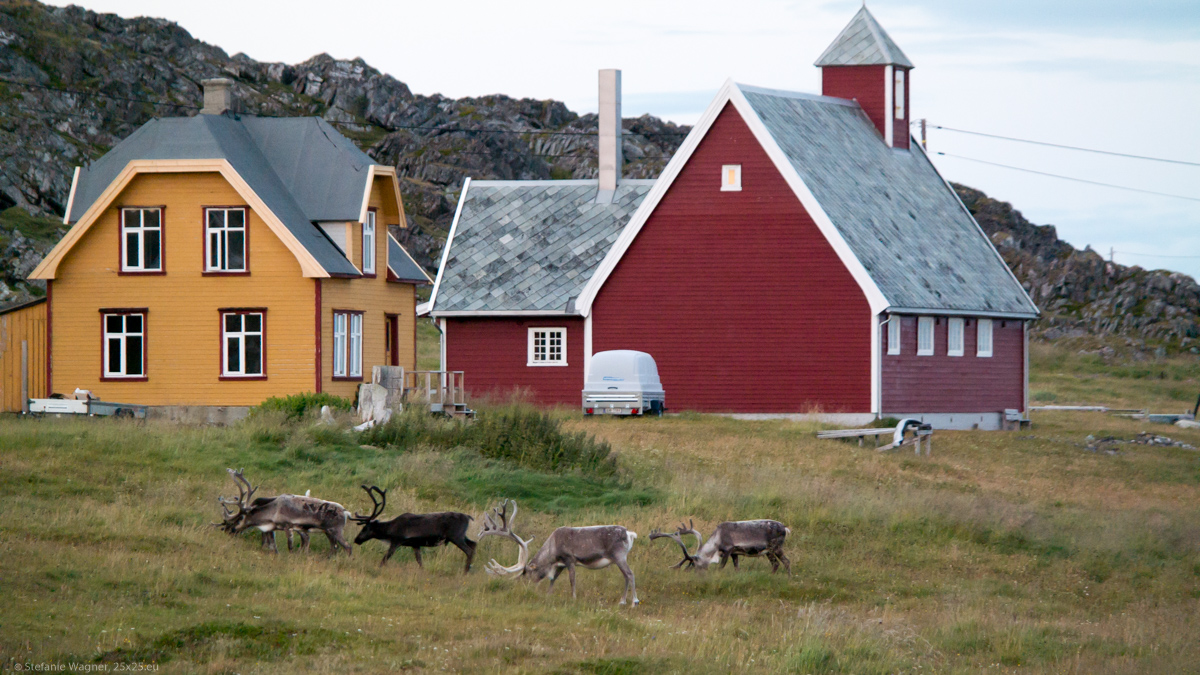 This is the end

If you take the Varanger Scenic route and drive it to the end you will end up in Hamningberg. And there the road really ends. No more roads going up North from here.

It used to be a fishing village. However, the harbor conditions were difficult, especially as the ships started to grow bigger. Harbor development was discussed but never done and the inhabitants moved away over time with the last all-year residents leaving in 1978. Now they use the houses as summer cottages.

The village was not burned down during WWII. So some of the buildings are older than usual.

Regarding the inhabitants of the village – reindeer are feeling very comfortable here.

When I was strolling around the village, taking a look at the remains of the harbor, I went around a corner and was a lot closer to one of the wildlife inhabitants that I originally wanted to be.

Even though they are used to people it felt a little scary to be so close to such a giant antler. I chose to slowly go backwards and around the corner again and wait for it to go somewhere else. Later on I had the chance to take some nice pictures using the telephoto lens (which felt a lot more comfortable with that distance).

It was such gorgeous weather that I thought I better don’t just leave the next morning but take a look around. There was a sign indicating a hiking path for the small mountain “Hardbakken”. You will get a very nice view.

Hamningberg even offers a small sandy beach that you can see from up here. I didn’t expect this so far up North. However, why not. After all, sand is not only found in warm regions.

What I didn’t have on my mind at all was that WWII left ruins of bunkers, batteries, and gun sites. The Germans really built a long defense line up here. I had been already amazed when I saw the ruins in Vadsø. But this was a lot more.

It is not just one place. There are multiple remains of gun sites and a lot of former underground structures. This required so much personnel. How did somebody think that could be ever successful?

We all know that the ocean is full of garbage. Here is a place where you can see it first hand as it seems like the current constantly provides replenishment. Big ropes, shoes, plastic parts from boats, bottles, canisters, small plastic pieces, they are just everywhere here.

There is a collection point down at the East shore (stony beach, not sandy beach). You can grab a mesh bag and start collecting garbage.

Obviously right next to the collection point you will not find a lot. But if you go along the beach for just some minutes you will have no problem filling up the net. It really doesn’t take long to collect more than you can carry.

Did you know that each year roughly 50 million tons of plastic from industrial fishing gear gets into the oceans? There were ropes and nets all over the place (and they are really heavy).

Until now I was only at beaches that seem to be either cleaned regularly (in touristic areas) or weren’t to exposed to that much garbage (perhaps because of the currents). It is one thing to read about it, but definitely another thing to see it for yourself.