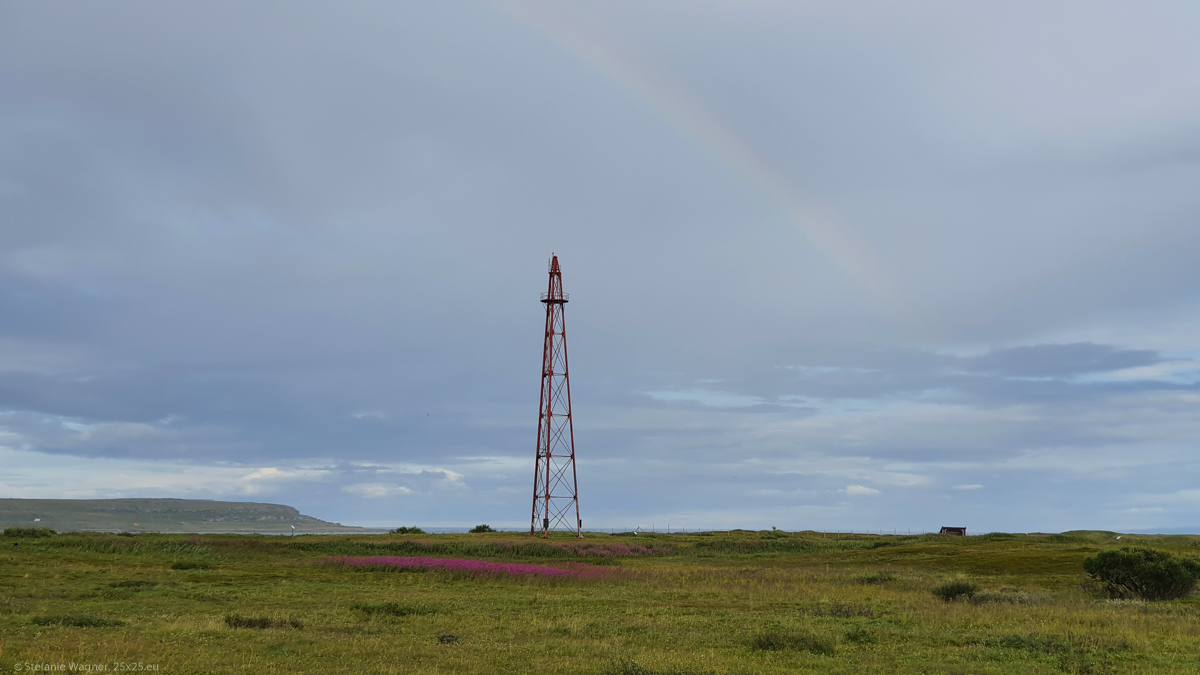 I read about the airship mast (or mooring mast) in Vadsø in the travel guide and on some blogs. The descriptions were not overenthusiastic. One even said it is enough to just see the airship mast from the distance. However, I had never seen an airship mast. I also understood that this specific one had quite some significance for reaching the North Pole. Which means, whatever they write, I am going there. To my surprise I didn’t just find some airship mast but a whole park.

The mast is situated on a small island next to Vadsø called Vadsøya. The Eastern part of this island is the so called Kulturpark (culture park). There is a loop path around it with several information boards describing the island’s history. I didn’t expect this. Nice surprise.

In case you wonder how they keep the grass so short. Here is the answer. Natural, eco-friendly lawn mowers.

There is no previous building left (above the ground) in that area. Therefore, the airship mast is the dominant structure on that side of the island.

The air ship mast was used by the Norge on the way to the North Pole in 1926. This expedition was lead by Roald Amundsen, a very famous Norwegian explorer of polar regions. However, if I interpret the information on Wikipedia correctly, he was not on board but when the Norge stopped here on its way. He was preparing the actual expedition on Svalbard at that time.

Those airships are really big. I wonder how they were able to tie something that big and prone to winds to the mast.

This expedition was very successful.

Two years later the “Italia” would dock at this air ship mast on another expedition, lead by Nobile who also participated in the tour with the Nobile. However, the crew crashed on their way back. Trying to rescue his colleague Amundsen disappeared on his mission and was never found. Later on I would find out more about this in a museum in Tromsø.

In Germany we are all about safety. As I already found out regarding the hiking paths also the remains of WWII are less secured here. Where we would have fences and other barriers here you are responsible to make sure you watch your steps.

Seeing gun emplacements and bunker like structures is a strange experience. The most I have seen like this are bunkers at the shore (e.g., in France or Sweden). But not remains, and nothing that you could just walk into.

There are several underground rooms on the area. How would they have been used? Just blank concrete walls today. The one above would lead to the gun. The one below, a bunker? But with a metal roof?

This used to be just an island with a fishing village in the past. Today a part of it is like a Swiss cheese due to the effort that people take on to occupy foreign territory.