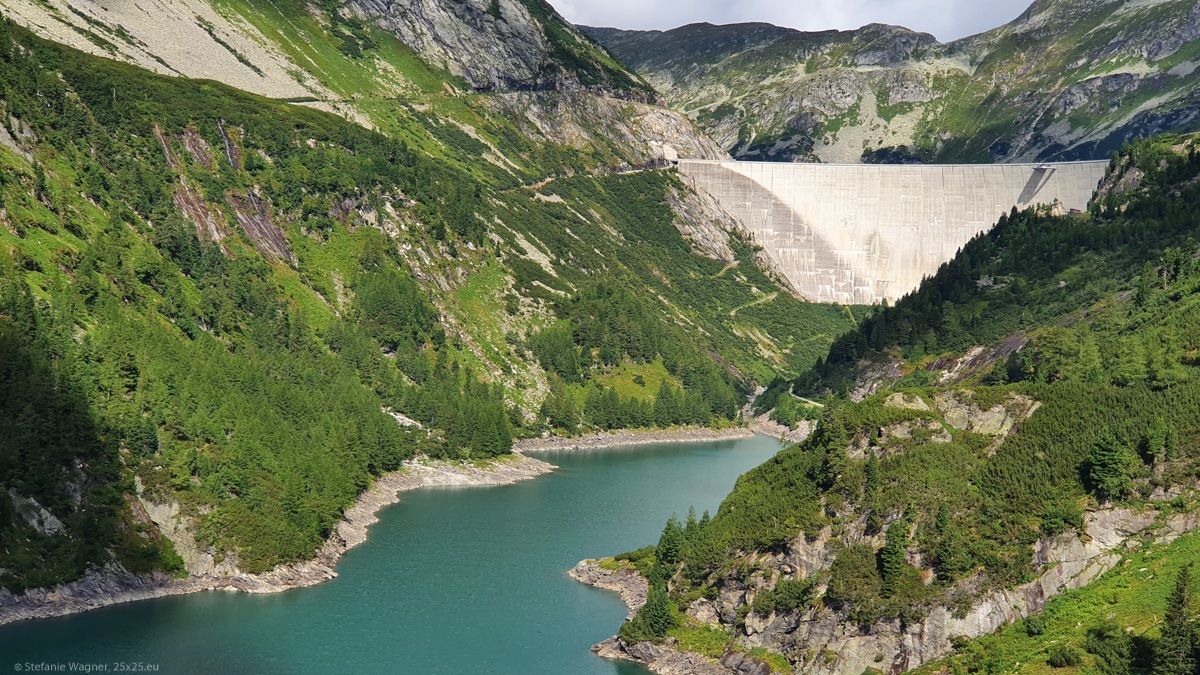 What is one of the most solid things you can think of? For me it was (until now) rock and concrete. I had to learn that both are more flexible than I thought when I visited the Kölnbreinsperre.

A “moving” dam – the Kölnbreinsperre

The Kölnbreinsperre is the highest dam in Austria. It stores water for hydroelectric power. Its wall is a double-curved arch dam which means it is slightly rounded horizontally as well as vertically. The water pressure squeezes it against its surroundings. Therefore it also needs to hold a minimum amount of water to not fall over.

I was very surprised to hear that when the reservoir is full the top of the wall will move by 12 cm (4.7 inches). Ok, this seems like not a lot but hey, it is a massive concrete wall. Good to know that it has a lot of sensors that monitor every part of the wall. The guide said there are around 6.000 and it takes one month to get through all of them.

Another thing that never crossed my mind was the fact that when you build a damn you don’t just need to examine the rock that will hold the wall. You need to look at the whole area. Rock is not always as solid as it seems. There are different layers of stone and they might get lifted and start sliding once they get under water and buoyancy starts. In such a case massive amount of rock can slide into the reservoir and create a flood wave that endangers people living around the dam.

That is what happened at the Vajon Dam in Italy that was built following the same construction principle. First they oversaw a mud layer making the mountain instable, then they underestimated the coming landslide. Instead of the expected 20 meter wave it ended up being a 200 meter wave killing around 2000 people in the area. On YouTube you can see some good explanations about what happened (short English version, longer German version with more scientific explanations, digital simulation of the waves).

Good to know that there have been extensive investigations around the Kölnbreinsperre and the mountains around the reservoir are stable.

Getting in touch with the universe

Nowadays light pollution is all around us. Some of us living in cities might not have seen the Milky Way for quite a while. Even outside the cities you often only get a glimpse of it. The Kölnbreinsperre lies rather remote in the middle of mountains. Lucky enough they don’t light the dam and the nearby hotel and a restaurant keep their lights low as well. This makes it a great spot for some long-exposure pictures of the Milky Way as there is no artificial light that would outshine the stars on the picture. So I decided to give it a try (was my premiere).

The result were very nice pictures (at least for me) and the insight that even when they say that during Covid-19 there are less planes you can be pretty sure you capture one on almost every long-exposure. Beside the planes I was also able to catch satellites and a small shooting star. There is a lot going on in the sky these days.

I could now tell how awesome it is to be in the middle of nowhere just on your own having silent deep thoughts about our existence watching millions of stars above. And even though this could have been a perfect setting it turned out to be different. I wasn’t the only one up there at night and I had a great talk with somebody about indifferent topics while making the pictures. As I was travelling alone at that time a good talk was exactly what I needed. So it became a perfect long evening under the Milky Way.