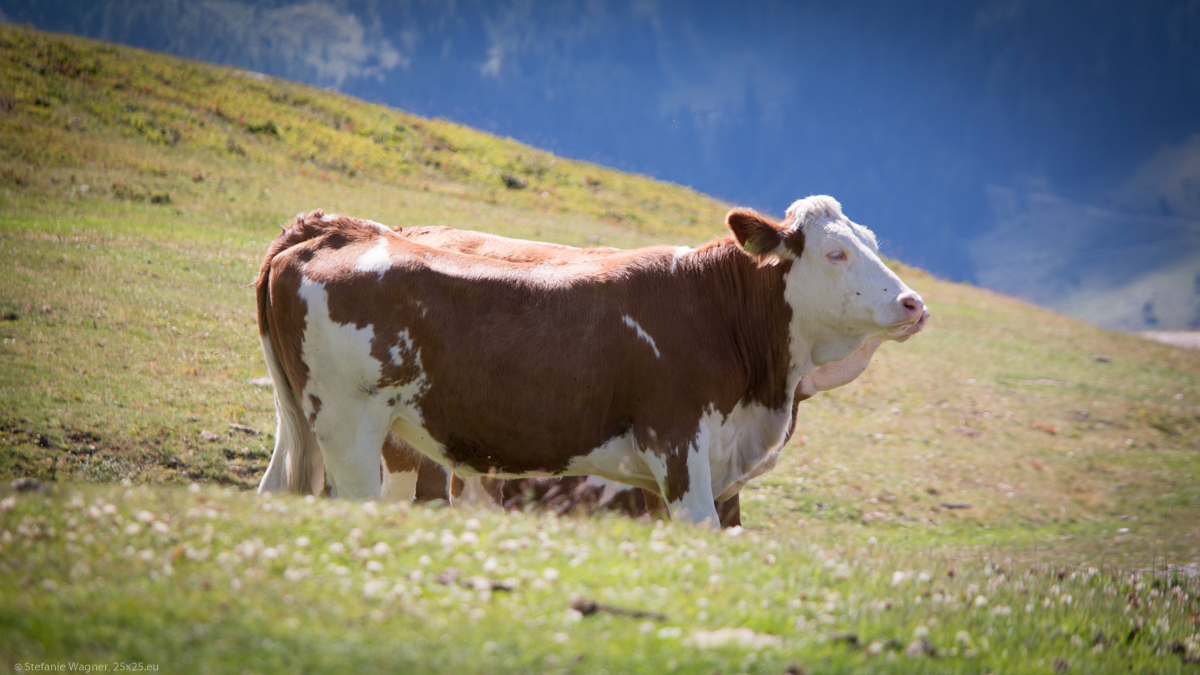 On a hot day it is a good idea to go underground (e.g. like here or here) or next to the water (e.g. like here). But sometimes it is also helpful to go high. This was my intention when I took off for Goldeck and Martennock. Even though I am usually very motivated to walk I took the ropeway for a head start.

While walking I saw a woman who was crawling through the bushes along the path picking something. I got curious so I asked her what she was doing.

She explained that she was collecting blueberries. Until then I had only seen blueberries in the supermarket and I would have never guessed that they grow on such bushes. That is why I had ignored them completely. I typically don’t try berries from bushes I don’t know.

I tried some but found out that I am not a big fan of this type of berries. Anyway, I at least now know how they grow.

Up there you have a beautiful view into the area.

Various forms of markings and symbols such as cairns and prayer flags can be found on passes and hills around the world. In this area summit crosses are most common. Generally they can be found in Catholic regions of the Alps, especially in Austria, Switzerland and Bavaria, but also in America.

Until recently I didn’t realize that those summit crosses often have a container with a summit book. But this time I was prepared and so I made my entry. Not a very fancy one though. Might need to practice writing deep, meaningful sentences.

There was a sign at the beginning of the trail informing about cows being around here. I usually have a lot of respect because they can get very angry and there had been some reports in the newspapers about attacks in the mountains. I haven’t been hiking in an area with grazing cattle so I hoped I get a around it.

A cowpie on the way showed me that this was most probably not going to happen.

And here they were. Directly on one of the peaks and exactly where the main path would go. I decided to chicken out and take another smaller path more down below.

Next time it wasn’t possible to go around but the group was very relaxed and pretty busy watching paragliders taking off and flying around us.

Seems like we can be some kind of entertainment for cows as well.

Finally there were some more lawn movers around – a herd of goats.

I must admit I didn’t expect so many animals up here. But they also made this hike special.