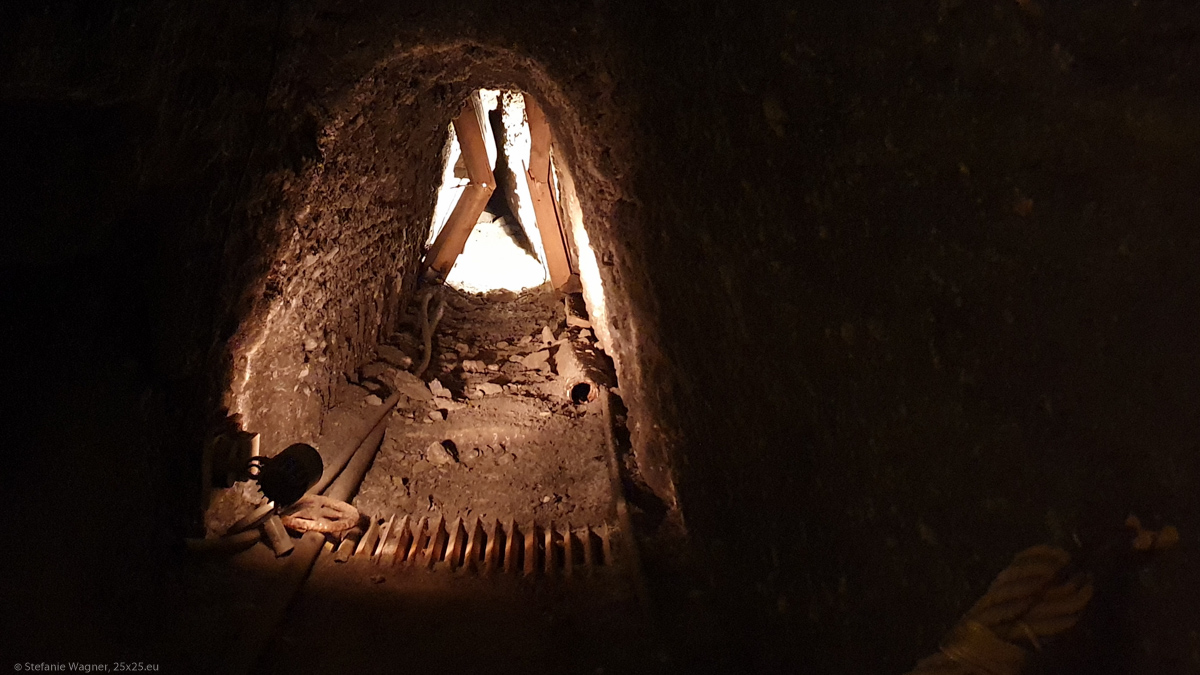 This area offers two impressive constructions of nature: one is made of ice, the other one made of salt.

What do you see when you see those mountains? I see stone, a lot of stone. But others see more than that. They see an opportunity for discoveries. They climb high to find caves, they dig deep to find treasures of the soil. It is this trait of explorers that offers us awesome insights today.

World of the Ice Giants (Eisriesenwelt)

This largest ice cave of the world creates ice sculptures during winter and spring while the cave is closed. As their shape depends on the amount of water dripping into the cave they change sometimes more, sometimes less every year. So even the tour guides don’t know what to expect when they visit the cave for the first time in a year.

Not only what you will see is a surprise. Also the way to get there and the way the guided tour is done is different compared to everything I have seen until then. You have to walk quite some time and you only get a cable car in between to make it easier. Obviously you don’t need to climb but still it is not like you exit the car and just walk into the cave.

There are areas where the path is roofed. You will see a lot of signs with warnings about falling rocks. It feels kind of scary when you walk in areas that are not roofed. The surrounding walls are high and just 1.5 months before my visit there had been an accident including falling rocks. Also you can see with all the gravel lying on the roofs that they are indeed necessary.

That makes you walk really fast in between and could count as the first part of the unusual adventure.

An unusual approach to lighting

Now that you made it up to the entrance it is time to enter the cave. And here comes the next surprise. There is no artificial light in the cave. The visitors need to carry their own light – a carbide lamp. Now you are really back in the times of the original explorers.

First your light might get blown out right away when you enter the cave through a door. The air draft there is very strong (btw – when you exit the cave this air draft is so strong that literally kicks you out through the door). Fortunately you have a tour guide offering you light again. Just imagine you are in the middle of a cave and your light goes out. I think I really don’t want to be a cave explorer.

Then you will walk around the cave and those carbide lamps have a really low range of light and not every member of the tour gets one. Though this gives you a very good impression of how it felt in the past it might leave you with some disappointment. The only ice sculptures you will be able to properly see are those that get illuminated with an additional bright magnesium light by the tour guide. This video can give you an impression what the interior looks like. Just remember, the light during a visit will be totally different.

It is definitely an unusual approach to visit a cave. I would assume in France we would have “son et lumière” (sound and light show) all over the place. A common way to display certain things could shape the expectations we have and impair our experience even though it is special. So we should be open to not miss out on chances to enjoy a remarkable environment.

For two of the involved cave explorers things didn’t end well. Both of them are remembered here. Alexander von Mörk was killed at age 27 during the First World War. His urn is located in the cave. Leopoldine Fuhrich was one of the first to explore the cave. Women were rather unusual in this profession in the early nineteen hundrets. That is why she got a plaque outside the cave. She died the same age as Alexander von Mörkel during an accident exploring a different site.

Both of them died being 27. Did you know that there is actually the “27 Club” with all the famous musicians who died at the age of 27? Jimi Hendrix, Janis Joplin, Jim Morrison, Kurt Cobain, Amy Winehouse to name a few? Even though it is a myth that there is statistical evidence that musicians die more often at this age I thought of this coincidence when seeing that both explorers died at that age.

Obviously such a destination also attracts a lot of families. And while I was there without my kids I had two encounters that made me wonder if the rules of upbringing kids have changed lately.

The first one was a kid around the age of 11 who was walking behind me. He always wanted to get the light (remember, the one with real fire). His parents tried to explain him multiple times that this is dangerous but he went on and on, even when he started slipping several times while we were walking because he was fidgeting so much. I especially liked the explanation that they don’t want him to light up the women in front of him (yes, me!). Of course he finally got the light at some point of time. Which was the moment I decided to bring some distance between us.

The other one was an even younger kid, maybe 5 or 6. While walking downhill outside he collected some small stones and started to move towards the edge to throw them. His father started saying “no, we don’t do that”. But the kid did it anyway. His father started explaining about the danger for others that might walk below and why therefore he should not throw stones. This kid was just smiling from one ear to the other, being totally happy that he did what he wanted to do. He obviously gave a damn about what his father was telling him. If the father really thought it could be dangerous for others, why the §%”& did he let his kid throw the stones in the first place? Btw – yes, there are hiking paths below so it is a stupid decision to throw anything there.

Sometimes I get the impressions parents would like to avoid a plain “no” and stick to it.

Did you know that salt was very valuable in the past? The Roman legionaries received an allocation of salt as part of their pay, the so-called “salarium” (from “sal” = salt). Now you know where the word “salary” comes from. Salt was necessary for conservation (no fridges at that time). In addition, the production of glass, leather or metals need salt.

The Celts first used brine springs before they started mining the salt already 600 B.C. This mining continued until 1989. Now you can visit the mines as a tourist.

First you get very fashionable clothes. The Covid-19 pandemic made the mask mandatory but it fits nicely with rest of the outfit. Then you hop onto a small train and off you go into the tunnel.

Unfortunately some of the areas were closed due to pandemic rules (we had to keep a certain distance). But still you still could get a good impression.

Salt was gathered by using water that washed out the salt from the stone. Today you can still see such a sea. You will cross it in a little boat accompanied by light and music (remember the light and music expectations from above?).

You will cross the border between Austria and Germany twice while being underground.

The tunnels are not stable. They need regular maintenance, otherwise the pressure of the rock around it will squeeze it to become smaller over time.

At some points you use slides to get from one floor to the other. Though, I am sure earlier they didn’t have signal lights, stop signs, etc.

The salt from in Hallein was the source of the prosperity of the town I live next to (Passau). The salt was transported by boat on the rivers Salzach and Inn. Amongst other cities the salt passed through Salzburg, Burghausen and Braunau before it reloaded in Passau to continue its path using horses. When the salt trade in Passau ended due to changed political dynamics the economic situation of Passau decreased significantly. It was interesting to see where the wealth of the city really came from.

Franz Xaver Gruber, the composer of “Silent night, holy night” lived in Hallein from 1835 until his death 1863. His house was right next to the church and the graveyard. His grave is the only one remaining after the graveyard was abandoned. Today there the area is a square in front of the museum (which used to be his residence). Therefore, the grave now looks a little displaced there.

It was very impressive what all is going on in a 25×25 km square.