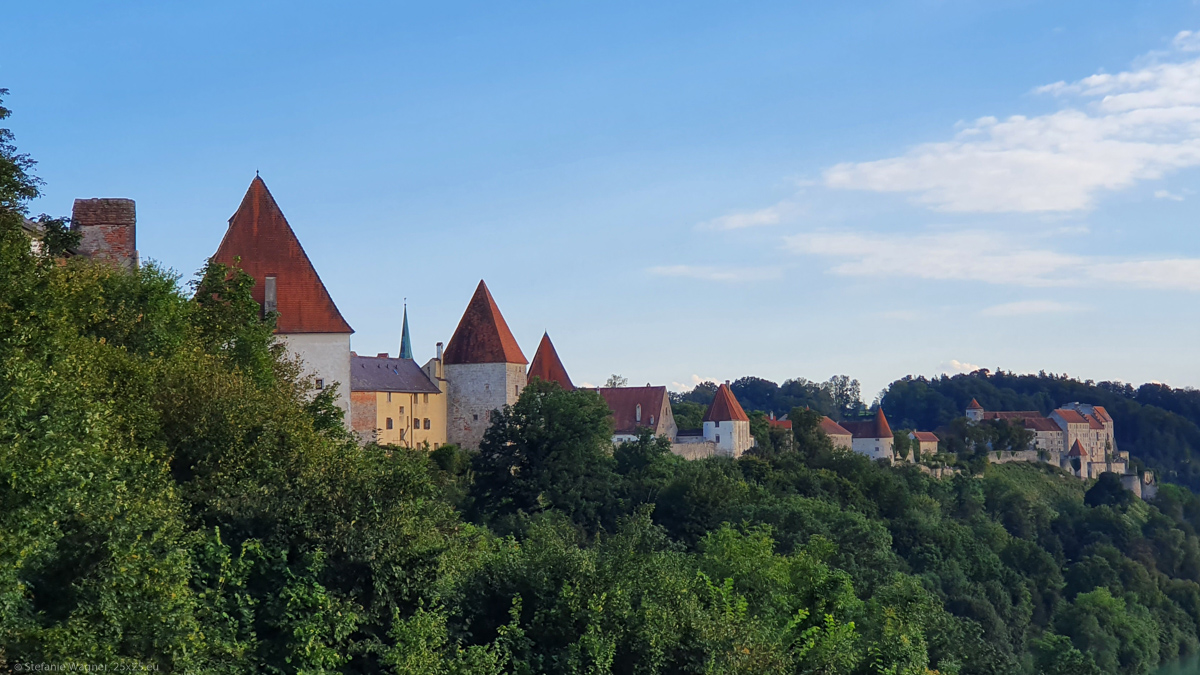 They have the longest…

Burghausen has a lot of things to offer. However, the most obvious one is the longest castle complex in the world. The site stretches out over 1.051 meters (~3,450 feet). Why did they add one area comprising buildings and courtyards after another? Because the dukes feared the Ottoman Empire. Therefore, just in case, they continued to make the castle stronger and stronger. However, the threat never materialized, the Ottomans (“Turks”) never reached Burghausen. But the castle ended up in Guinness World Records book. I consider this to be a nice outcome.

Today some of the premises in the castle are regular residential buildings. One of the reasons is that regular heating and airing helps preserving the structures. This can result in very funny moments. Like when an older lady, living in one of the buildings apparently had her granddaughter paying her a visit. While they were standing outside talking the lady very loudly asked about her granddaughter’s love live. All castle visitors next to the scene pretended not to be interested in the answer 😉.

By the way – from the castle you have a beautiful view down on the city. And you can see behind the scenes of the Inn-Salzach architecture (means the specifics of hiding the roofs behind upward fronts) that I describe in another blog post.

Sayings and their historical meaning

The tour guide showing us around referred to some sayings that origin in the middle ages. I find it very interesting to see where some of the sayings that we regularly use come from. I remember while being in the US I had to write an essay about the fictitious meaning of the sayings “kick the bucket” and “once in a blue moon”. It was so much fun to create made up logical explanations.

Obviously a lot of those sayings are very language specific. And I can only refer to a German example that our tour guide gave us: “Schlitzohr”, which is a rascal or chiseler in English. Literally translated it means a slit ear. So why do we call them Schlitzohren? There are three different possible explanations originating from the middle ages:

Yikes, not so nice.

How often do you use phrases you don’t know where they are coming from? Might be fun to find out. I got a book describing more than a hundred of them and enjoy reading about e.g. why one can “have pigs” (“Schwein gehabt”), you can “die laughing”, or why “eating cherries with someone is not good” (“mit jemandem ist nicht gut Kirschen essen”).

Burghausen was part of the War of the Succession of Landshut when George, Duke of Bavaria-Landshut, who was born in Burghausen, and his wife Hedwig Jagiellon didn’t have a male heir. George pronounced his daughter Elisabeth to be the heiress. This was against the rules so different parties went to war. I am very happy that in a lot of countries legal succession is open to both men and women. But unfortunately this is not the case everywhere.

Imagine they would have allowed Elisabeth to inherit the title. No war, no casualties.

A side note: Elisabeth, her husband and two of her kids died of dysentery which ended the war. Another thing that is not common any longer in many countries today but unfortunately not in all. Still 1 million people die every year of something that could be rather easily cured nowadays.