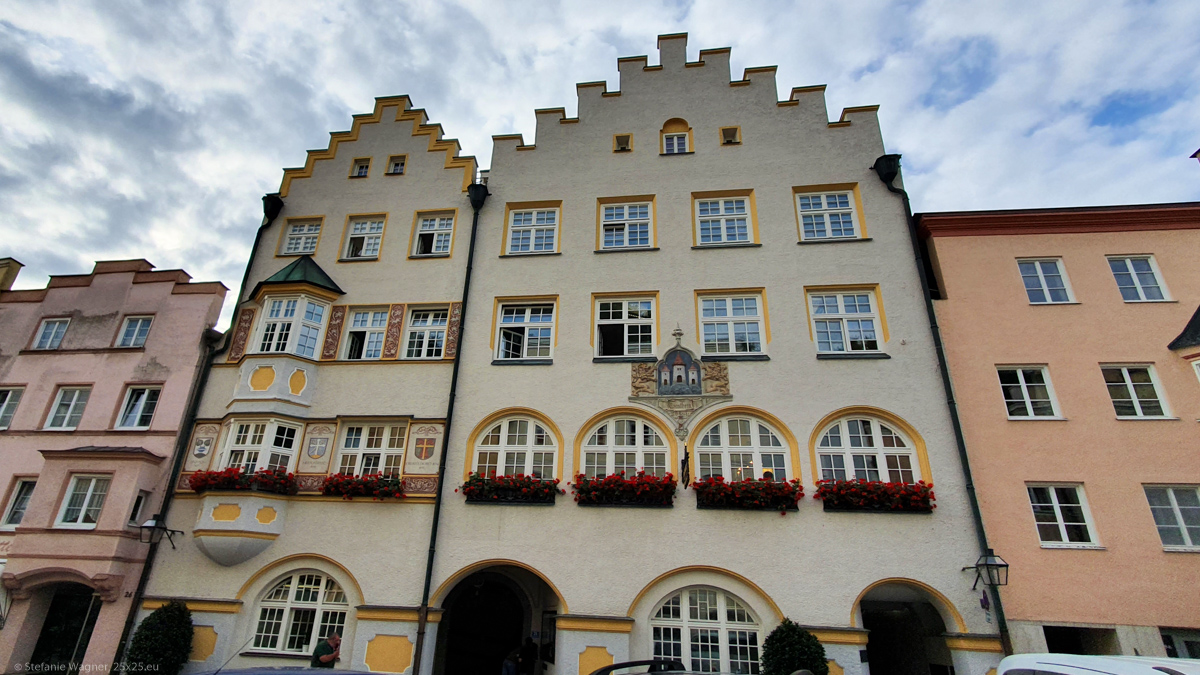 Trostberg is a nice little city but nothing special around. It is perfect if you need to come down a bit. The old part of the town is built in “Inn-Salzach-Style“. This architectural style is often used in the areas next to the rivers Inn and Salzach. A typical feature is the upward front of houses, which mostly hides the roof when viewed from the street.

The intent of that architecture is to protect the houses during firestorms. The tall walls should prevent the fire from reaching the next house. Also it helps to lean ladders against the walls.

Sometimes you identify those “fake” fronts when looking at the rain gutters. They will show up in the assumed interior of a house instead of being on the side. Or they appear a lot lower than the visible structure would indicate because the roof is a lot lower behind it.

Unfortunatly it seems like Trostberg’s city center is hit by the change in consumer habits and the pandemic. A lot of the stores were closed which made the main street look a little abandoned.

The history of the bare butt

It is rather surprising that you will find a fountain with a figure showing its bare butt to everybody in a small village in Bavaria. However, of course, there is a history behind that and it is supposed to be a heroic one.

Hans von Pienzenau, ducal keeper in Trostberg from 1492 to 1499, defended the Kufstein fortress in the Landshut War of Succession in 1504 and is said to have shown the bare bottom before his surrender. He was then beheaded. On the pedestal of the Pienzenauer fountain it says (in Bavarian dialect): “Whoever is right shouldn’t duck! If it has to be, it has to be said, then as now to the emperor and the authorities!”

In case you plan a revolution, be sure you know how your legacy should be remembered and how you want to be pictured ;-).

You always meet twice in a lifetime

Funny enough I met an Italian couple again when I was looking for a parking spot in the evening. We had already met in Simbach am Inn in the morning which is around 60 km (37 miles) away. As the campsite was pretty full I had to squeeze myself into a place that covered part of their area. But as we “knew” each other they were fine with it and I didn’t have to go around searching for another spot.

This reminded me of the proverb “you always meet twice in a lifetime”. Be nice to each other! You never know how it will come back to you.