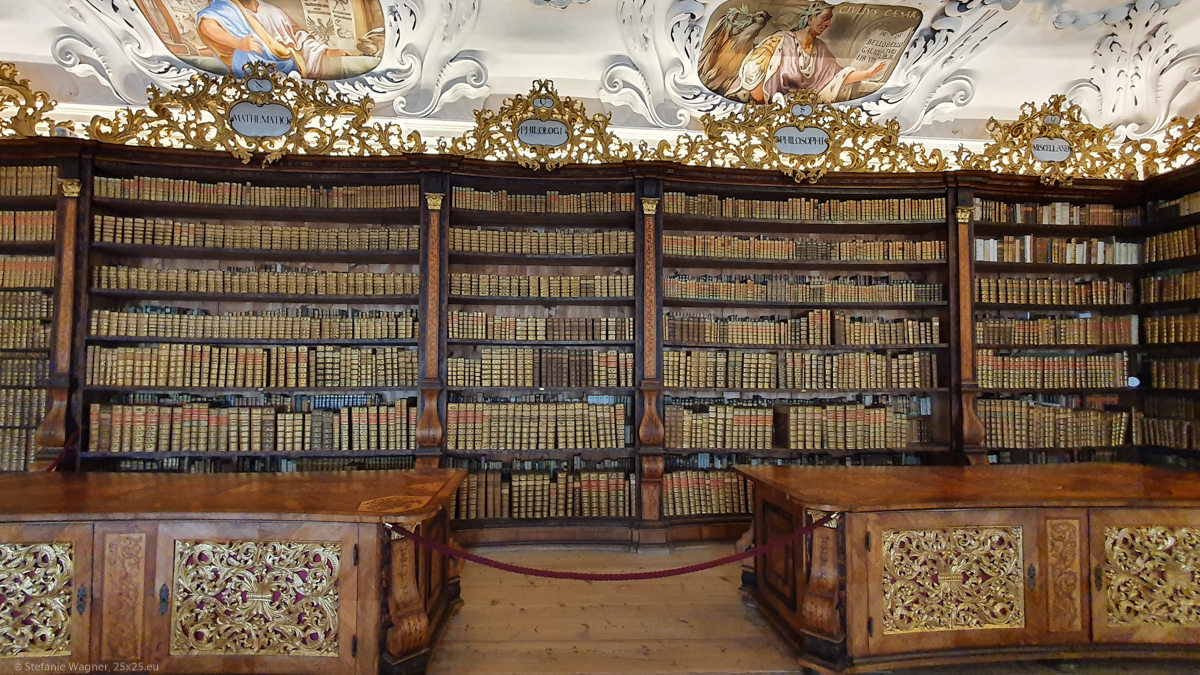 I took the chance to visit Kremsmünster Abbey, my the first time to take a tour in an abbey. I didn’t call them upfront (as the web page indicated one should do) and just showed up at the right time. What they didn’t write on their page was that due to Covid restrictions they would only allow 4 people in a tour. However, exactly one spot was available and so I could join. I can only recommend a visit (no, this is not an advertisement – I made the decision to visit on my own and paid for it myself).

Our tour guide told us a lot about the history of the abbey (like who founded it, how old are different buildings, etc.). You can read all about it in Wikipedia. But what made it special for me?

Immediately when we entered the church of the abbey I thought I am in a shrinked version of our cathedral at home in Passau. It is as bright as St. Stephen’s Cathedral and has a similar type of ornaments. Our tour guide told us that it was the same person participating in both buildings. After doing some additional research I found out that this is not entirely true. Both were brothers but one here in Kremsmünster was a builder and the other one in Passau the plasterer. Nevertheless the similarities are visible (if you know the cathedral in Passau).

As it happend with a lot of churches this one had a different style originally and was baroqueized. There is one room that they have restored to its original appearance. You can still see some of the coloring which I find astonishing given the fact that all of this had been covered by plastering.

Bishops of Passau played an important role for the abbey. E.g. one participated in its founding plus in between it losts its independence and became part of the diocese of Passau.

A library with a surprise

I think I might have stated in other posts that I really love books. I am a bookoholic, having books all over my place (yes, some of them I still need to read). The abbey has one of those wonderful old libraries. One that makes you think you are in some kind of a Harry Potter movie.

Unfortunately (but for obvious reasons) we couldn’t take one of the books to see how they are written on the inside. Still it was just impressive.

Now, look closely at this bookshelf! What do you see?

Your answer might very well be: a bookshelf. And you are partially right. But only partially. At some point of time they wanted a shortcut between two rooms and decided they need an additional door. So just like being a wizard you can open a door here. You just need to know where to press the button… ehm .. book.

And, voilà, the door will open.

Isn’t that awesome? I just love it. If I ever accidently become a millionaire and have a library I want something like this! The best fake door ever for booklovers!

How to open a book?

For all the Germans: how do we say that we open a book? Yes, we say: “ein Buch aufschlagen” which would literally translated mean “to punch or beat open a book”. This is one of those things that I never though about. Why do we not just open a book, why would be so violent and beat it?

For this we need to go back in time when books had book clasps to keep them properly closed. Our tour guide explained that some of those clasps were designed in a way that when you hit the book with your fists the clasps would open. We were able to try that out ourselves. Guess what, it worked when I tried it.

I must admit I didn’t even now that books used to have such clasps.

Kremsmünster has a very famous chalice, the Tassilo Chalice. Not only does it look great, it also contains a lot of hidden messages (there is a long German article on the details). If you take all the letters of the inscription that can be used as Roman numbers they add up to 781 which is supposed to be the year in which the chalice was crafted. A Hidden messages in a message.

More surprises and some missing honesty

There were more surprises, e.g. how would you solve the problem of painting the faces of previous leaders of the abbey if you don’t know how they looked like or how do you cover up a snuff box or small can a bible get or why would a deer’s antlers have candles on them? That made it a great visit!

What I didn’t appreciate though is that our tour guide missed out on telling us about some of the not so bright history of the abbey when it comes to its former boarding school and child abuse. It is now the past and they have helped to uncover the whole story. So, from my perspective, it would have been more honest to tell about that history as well. Not just – the abbey had a boarding school but this is closed now and only the school remains plus videos on how great the monk community is in the abbey. In my personal opinion it would be more powerful to tell about what went wrong and how they are helping to prevent anything like this today. I couldn’t ask our tour guide about it because I only found out about it when I did some research for this blog post.

What do you think. Should only the good history” be told on such tours?