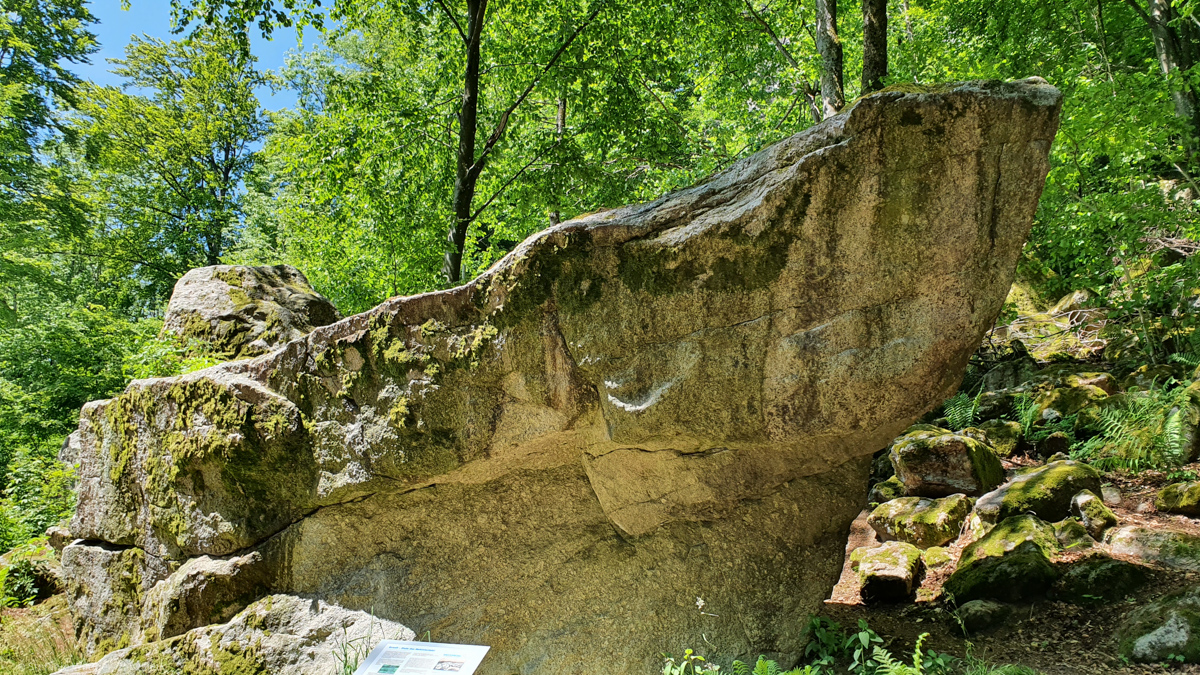 Nice weather, good time for a hike around the ruins of Waxenberg. The castle was built somewhere before 1300 and burned down in 1756 after being hit by lightning.

Sometimes it is hard when you are different. However, difference spices up things, makes it more interesting, is a chance for new thoughts.

I don’t know what they had in mind, but there is exactly one step on the stairs towards the tower that has a different orientation. All the others were put in the exact same way. Only this one falls out of the ordinary. And it was exactly this step that made me think about what it means to be different and to make a difference and what thinking out of the box could help once in a while.

Being creative – what do you see?

What do you see when you look at this picture?

You might see a huge stone in the middle of the woods. Or – you might see a boat. Kids from a local school wrote stories about how that boat might have come here. One story goes like this: “One day the castle got attacked. To get free they built a boat, put knights and weapons on it and let it roll down the hill so that it would break through the wall of enemies. Unfortunately, the enemies had a wizard and he turned the boat and all what was on it into stone forever.” Another story tells about a giant. His friend was a travelling dwarf who told our giant about the boats on the Danube. The giant liked the idea of a boat. Therefore, he took a huge stone, formed the boat and was happy looking at it from now on.”

What would be your idea? Why would a boat made of stone be in the middle of a forest on the side of a hill that has the ruin of a castle on top of it?

Being creative – old stories and myths

Other stories persist for a long time. And sometimes I wonder, where those stories come from. What do you see here?

The story goes as follows: in the past they wanted to build a small church. They started the work but every time they came back the church was destroyed. They said it was the devil. Every night he would take all the stones and carry them away. He would lose some of them while walking and that is why so many stones used to lie around in the woods. Obviously carrying those stones was heavy and even the devil had to relax occasionally. So, he said down on a big rock (this one here) and left a trace of an “unspeakable body part”.

I think you need a lot of fantasy to get to this explanation. Impressive, what people’s minds are able to make up. After reading this coming up with a story for the boat should be even easier, right 😉?

By the way: Did you know that in former times a fork wouldn’t be used in Christian Europe because it was considered devilish?

Being creative – the Guardians of Time

What I didn’t expect in the castle are figures looking like monks. They were placed in various areas of the castle.

May I introduce you to the guardians of time created by Manfred Kielnhofer. They appear and disappear, not staying permanently at any place. They should remind us that all what we do is seen and evaluated by the guardians.

Am I the only one who thinks that they look a little bit like the dementors of Harry Potter, just more golden?

Every time I come along clover in the woods, I would look for a lucky clover. So far, I think, I have never found one.

But that doesn’t matter. It just reminds me of how lucky I already am. I am healthy, I have a good job, a home, wonderful kids. I have clean water and enough to eat. I live in an area without war, I can travel if I want to or stay in my house and garden if I don’t. I can even do this on my own and don’t need anybody (especially no male) to accompany me. Perhaps I can’t find a lucky clover because I already have all the luck I need.