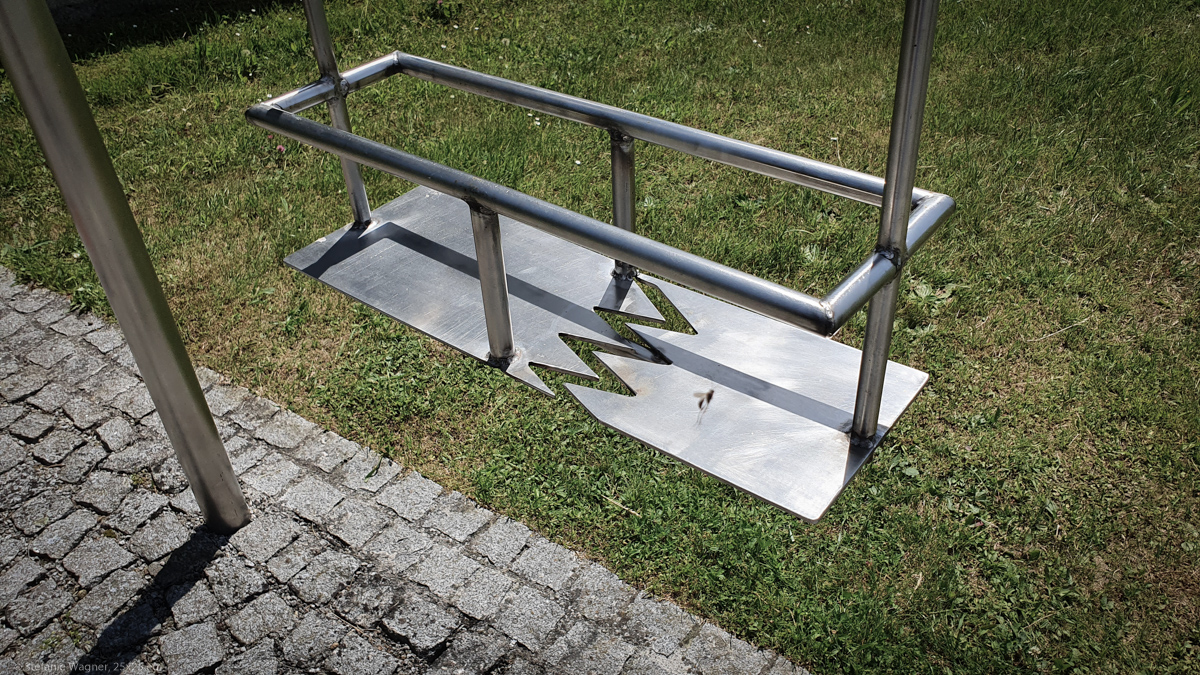 Sometimes you visit different places in one square and they are so different, that it is even hard to put them into one blog post. This is one of those posts that are difficult to combine. On the other hand, just because there are very dark parts of history in an area I don’t want to ignore whatever else is or was going on there.

A walk to Mauthausen

I avoided concentration camps in the past because I was afraid of the emotions it would cause. I visited Ebensee but here the actual concentration camp is gone. There are just some remains. This is different. This time my trip was explicitly to visit one that still shows how it looked like.

I stayed at a camping site and decided to walk the ~8 km to reach the memorial. I had the feeling that I should take my time going there and going back. Driving would not have allowed my thoughts and my emotions to be in sync. Sounds strange, I know.

While walking I first went along the Danube which was quite nice. I passed through Mauthausen (more below) and started my ascend towards the concentration camp. What I found out later is that I may have walked the same path that the prisoners had to walk. They arrived by train and then had to walk the last kilometers to the concentration camp. It was a hot day, the path is quite steep. I was getting thirsty, it was arduous. But I had water, I had proper shoes, I knew this was only a visit.

After passing a larger farm building and turning around a corner I saw it. And it shocked me.

I must admit, I don’t know what I had expected. I didn’t look anything up before. Somehow concentration camps were more like barbwire and barracks for me (yup, not really thought through this). This big building, the tall stone walls, nothing you would ever come out of again. How could people still keep hope somehow? Again, I knew I would be walking down that hill in the evening. Nothing would happen to me. I knew all of this. Still – I was shaken by just seeing it.

The operators of the memorial do a pretty good job in giving you an overview of what happened, where everything was located by offering an app for mobile phones. You can walk around without a guide and still get very good and detailed information.

I stayed there several hours. It is nothing I could rush through. I had to let it sink in. There were a lot of touching moments and they will be different for everyone. I just want to share some of them. You can read all about the camp in overviews like Wikipedia or the memorial website.

The prisoners on their walk passed by several buildings, farm houses, etc. No one could have said they didn’t know anything. Even more, when once prisoners, who knew they would be executed anyway, managed to escape a “rabbit hunt” with the support of several locals took place to track down and kill them. I understand that from one point on it was live threatening to not obey to the regime. But there is a range between not actively supporting the refugees (which some families did and that is why out of the 500 escaped 11 survived) and actively supporting crimes against humanity.

There is a lot of beauty there today. What used to be an area for sick barracks that quickly became a death trap is a meadow now. When “grass has grown over the matter” you can easily forgot what happened here.

There are memorials from different countries. A little aside there is a memorial for the kids and teenagers. It has a broken swing. This was the moment when my tears came.

The “death stairs” were used to make the work in the quarry deliberately difficult and dangerous. The quarry was also used to execute prisoners by pushing them over the edge. They called it the “The Parachutists Wall”. How can people be so sadistic?

They had crematoria ovens to burn the dead. Those had to be built by someone, by some company. There was business in the systematic killing of people. And not only business but also invention as the company that mostly built those ovens (Topf and Sons) even filed a patent for a more sophisticated oven to increase the number of corpses that could be cremated in a certain timeframe.

We should never forget. Not because of guilt, but because of protecting the future. Genocides are still around us and violent hate lures beyond the surface.

What else in Mauthausen?

Once a city is associated with a certain something it becomes hard to look beyond it and see what else might be there. Don’t miss out on finding

In Mauthausen I found castle Pragstein that is now not any long on an island in the Danube but faces the rolling traffic of a main street.

You can see very old chapels, one with frescos from around 1250. Just put that into perspective: this was around the time Marco Polo set off to China, Christopher Columbus was not even born.

If you have enough money you can decorate houses in a very individual fashion. Guess what the profession of the owner of those two houses (white/orange and pink) was when he remodeled them in 1989.

Even though the Americans freed the prisoners of the concentration camp the area was then governed by Russia when Austria was divided by the occupying allied powers. The rivers Danube and Enns where the borders between America and Russia. Therefore, the conditions in Mauthausen were different from the ones e.g. in Enns, the city lying just on the other side of the river.

When I was passing through a small passage I came by an older woman sitting outside her house doing crosswords. We greeted and she invited me for something to drink. As it had been a very warm day and I had already finished my water I gladly accepted. We spent quite some time sitting in the shade and talking. About the history of the city which obviously included the camp and the way the memorial develops as well as the situation after the war. But we also came across the situation after the war, the current traffic and the remodeled house I mentioned above, politics and Corona. It was a very nice experience.

As I wrote at the beginning this square was quite a challenge because of the very diverse experiences. After my visit to Mauthausen I spent another day in Enns. During the Roman Empire the area was known as Lauriacum and it was an important administrative center for the Roman province of Noricum.

The ashlars at the base of the church St. Laurenz are from the stones of the legionary camp. Inside the church you can see excavations that reveal several layers of previous buildings. The walls also here date back to the Romans.

Today you can still see parts of the ditch that surrounded that Roman camp.

They also found the remains of a lime kiln battery. Twelve lime kilns meant real mass production. For kilns to function properly a lot of wood needs to be burned. The info video described that the air quality must have been pretty lousy when the kilns were running. Here goes my romantic imagination that at least the air was better those days.

I love how things interconnect. Enns and Passau (my hometown for most of my life) share two points in history:

Fun fact: The city tower of Enns has a clock with flipped hour and minute hand. The hour hand was there first and already long. So they added the minute hand as the shorter one.

Those two days were extremely insightful and showed me again why traveling is so important for me.