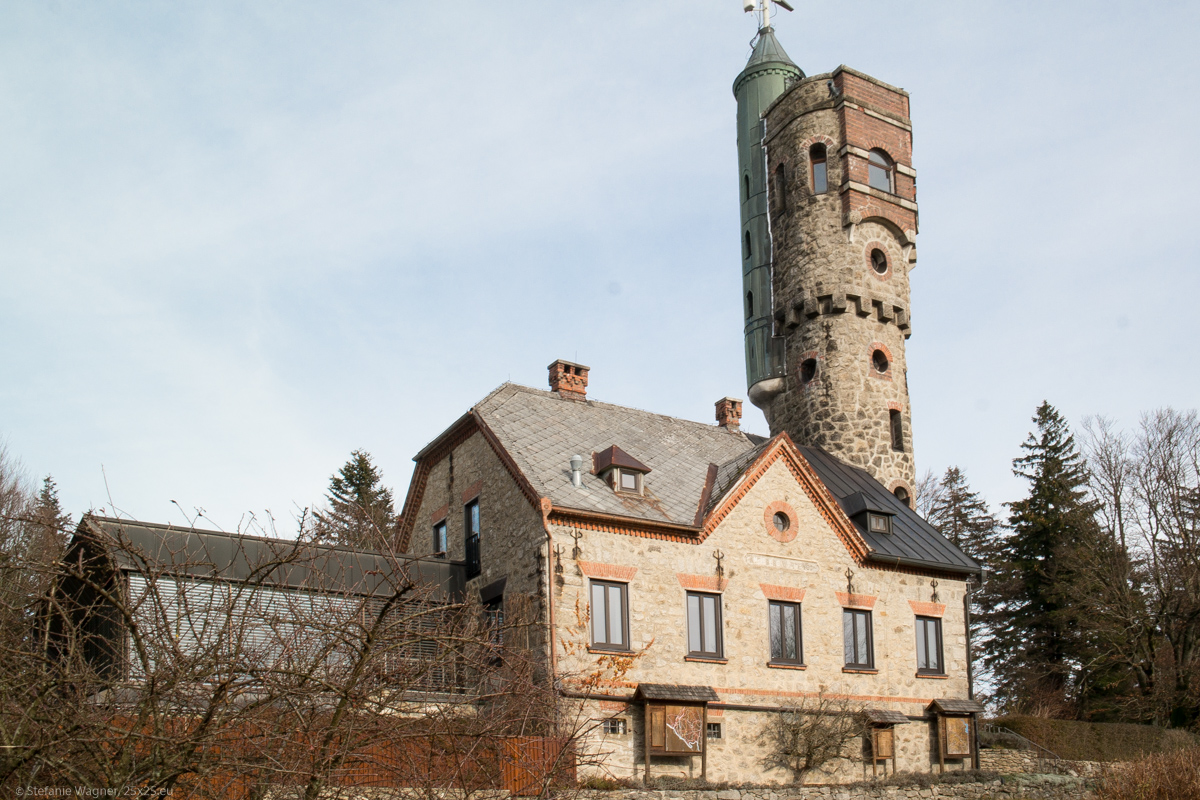 You get up in the morning and the day puts on its perfect autumn dress – gray, wet, foggy – which means an invitation to hop onto your sofa and stay there the whole day… or … you could try to get above the fog. So I picked the highest mountain I could find in square R 65 12 and gave it a try.

It worked out. Being high enough I had a blue sky and a wonderful view into the valleys that were still covered in white.

Even though the temperatures were not that high – around 4° Celsius (39° Fahrenheit) – it was nice to walk. I took a signposted hiking trail of around 10 km (~6 miles).

The Ameisberg is around 950m high (and therefore roughly 600m higher compared to where I live). Its name is a combination of “Ameise” (ant) and “Berg” (hill) as it is supposed to look like a formicary. I haven’t been able to confirm this because I didn’t properly see it until I was there. There are a lot of hills next to it and I didn’t identify it upfront. And when you are on top of a mountain it is quite hard to determine its shape. But at least I saw a real formicary while hiking (but with no visible life). I think that has to count for something.

On top of the mountain there is quite a unique building (Ameisbergwarte). It consists of a tower and a house. The tower was built in 1903, the house in 1904, which became a restaurant over time.

The tower is so funny, I have never seen something like this. It is like somebody started to build a fairy tale tower, then decides that the front needs to look more flat, and then figures out that he still needs another part at the back that only be added with a metal construction. Rapunzel’s father going wild?

If you compare the ancient pictures and the current one below you will see an additional modern part that was added in 2013 on the left side (plus there is the typical mobile transmission tower that gets added to every tall building).

I don’t know. The new part has nothing to do with the old one and doesn’t fit at all. For me some of the magic is lost due to it. But I assume living in the new part is a lot more cosy than in the old one.

At the time of writing the former restaurant was closed and the whole premise for sale for 1.5 millon Euros (the ad is not online any longer). Well, not exactly the money I have in my pocket so I had to limit myself to watching and hiking.

Some discoveries along the way

In a rural area you typcially can find a lot of different animals.

What I didn’t expect to see were lamas (at least I think this is a lama). What are they doing here?

I noticed a sign next to the street that advertised self-made honey as well as propolis and bee wax. Wait a minute. Propolis? Do you know what propolis is? I had never heard of it and had to look it up. It is also called bee glue and bees use it for multiple purposes as building material in their beehive. Humans seem to like it because of its use in traditional medicine (but research has not proven yet that it is really effective). Again something new learned.

The locals also appear to have a very nice way of recycling bath tubs. You can find them along the way for a lot of different purposes.

I think I so saw so many I could make a collage poster out of it.

History in the woods

Normally you could think that a forest is a forest and that nothing much is in there. But we don’t know what history it has unless somebody does some work and puts background information out there.

I came to know that the area I was walking in used to be a smuggler eldorado. Between the 16th and the 19th century you could find customs borders almost anywhere in that region. They were not just between countries but also between smaller political areas, on streets, rivers, etc. Smuggeling was very popular.

A cross marks the location where a fight between smugglers and officals resulted in the death of one of the officials. The residents of the area (who often helped the smugglers) built a cross on the spot where the ground had been covered with blood. And from that time on they named it “Red Cross”.

The written sign next to it also mentioned that the Thirty Year’s war had been in that area. But there was no reference to a specific location that I could visit.

Another specialty near the path is a so called “Troadkasten” which is an ancient form of granary. This one was built in 1760 and moved to its current place in 1967. If it would not have said that it was a storage I would have thought it was just a small very old house.

Directly next to it was a perfect example for stamina.

I escaped the fog but only to be able to touch the sky. While I was walking it became more and more gray again and the clouds started to lower. I could see them coming closer and closer until I was right in the middle of them.

Gone was the nice view, the sun and the blue sky. What remained was a kind of surreal feeling. You could not see far anymore.

When I drove home I was in between fog and clouds again to see the sunset.

Anyway it was a fun hike. Not exactly as expected but isn’t that what makes roaming around finally interesting?