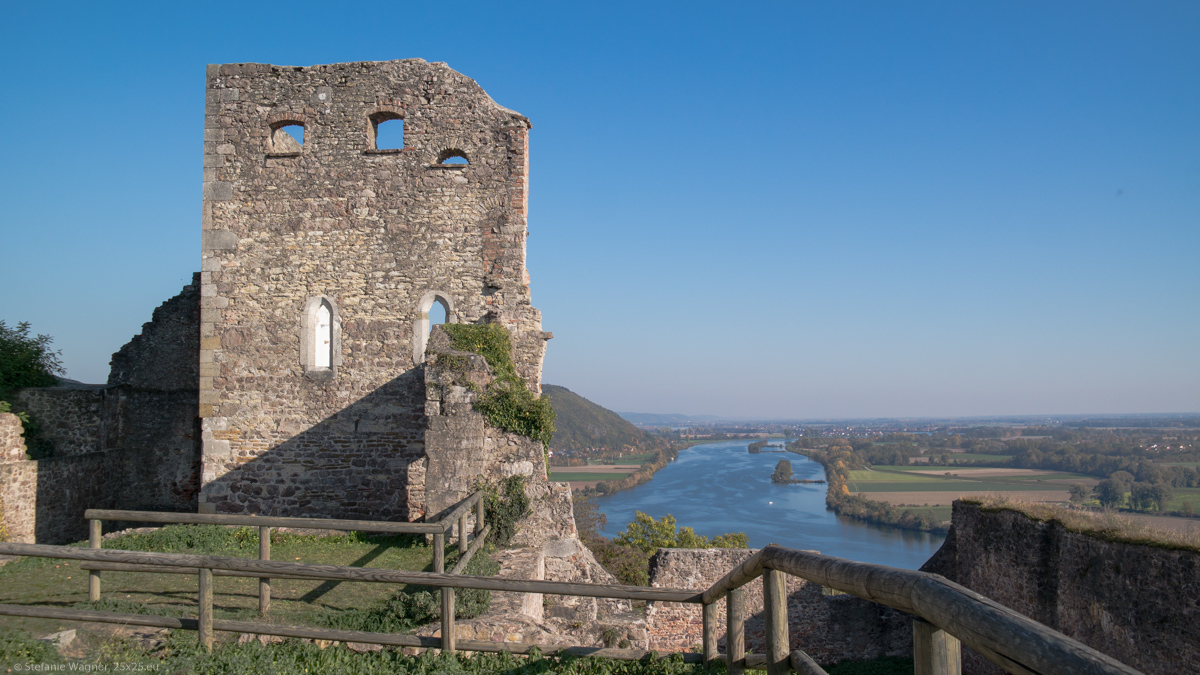 Do you know those areas where you drive by quite often but never take the time to stop and have a real look? This time I wanted it to be different and instead of just going to the big furniture store in Regensburg I headed for the castle ruin Donaustauf and the memorial site Walhalla first.

Castle Donaustauf used to be quite an impressive building. The first version (after the Celts) was constructed somewhere between 913 and 940.

Its position was strategically important and a good place to control goods movement on the water or also once in a while a good starting point to grab something.

The ruins have been secured and it is now a nice place to walk around.

You can see Regensburg in the distance. (Spoiler alert: Regensburg is going to play an important role in the castle’s history.)

But you don’t just have the ruins. You also have the technological present around in the shape of a geodesic reference point. On the side it explaines how GPS works. On the top it shows the coordinates of the stone.

You can fetch your smartphone and verify if its GPS location is officially correct by comparing the coordinates with those on the plate (found out, mine isn’t, but already saw this on the map itself). I wonder who decides where to put those reference points? I didn’t expect one exactly here.

It is interesting to see that the emphasis of this place is not about the history of the building but more about the nature that surrounds it. All the information plates were about plants and not about buildings.

The usual life in the castle was abruptly discontinued when at the end of 1633 the Bavarian castle crew decided it would be a good idea to rob a Swedish salt haul. The Swedish were around because they conquered Regensburg in November 1633 during the Thirty Years’ War.

Looks like the Swedish were not amused and they came for a visit. In January 1634 they took the castle, pillaged it and burned it down. I don’t have further details on the history but I really wonder what the local crew thought would happen? The Swedish troops just got Regensburg. Why would they think those troops would not be able to get the castle? Not the best management decision.

I had a beautiful encounter with a family who was walking around. Their daughter was very interested and asked her parents a lot of questions. They all started with “but why”. The parents did their best to answer but every answer would only bring up another question.

This little girl was fully concentrated and absorbed and curious. It was obvious that this was a bit exhausting for the parents. But they didn’t give up.

When do we lose this curiosity in our lives? I usually don’t see adults asking so many questions and I don’t think this is because they know it all. Why can’t we create an environment in which the curiosity of a child survives a little longer?

This young lady reminded me again to just look around and ask a lot more “why”.

Busts, artists and some feminism

Another impressive monument that looks like some Greek cargo plane lost a temple is the Walhalla.

Due to the fact that you need a written photo permit for any exterior and interior pictures which you need to collect upfront, pay for and that includes a lot of paperwork I will not post any pictures I have taken myself on this page. To get an impression please check the pictures of Wikipedia:

Conceived in 1807 by Crown Prince Ludwig it is the hall of fame of “politicians, sovereigns, scientists and artists of the German tongue”. And there are still people added once in a while. So it is not only a museum.

Speaking of German tongue some of the inscriptions that describe the person are unusual (but yet descriptive) from todays perspective. For example the composer Mozart is described as “Tondicher” which literally translated means “sound poet”.

You will walk along the walls filled with busts and plaques about people you might or might not know. There is an audio guide available that you can consult. Without it the Walhalla is more of a monument that you see but don’t know what to make out of it after you left.

There are two things that specifically caught my interest beyond the architecture alone. The male/female ratio and the way the busts are crafted.

Overall there are (right now) 130 busts and 65 commemorative plaques (plaques are used when there is no portrait available on which to model a sculpture). Of those 195 items 12 are women – 6%. Seems like women of German tongue did not have much impact until now. At least according to Walhalla.

In 1994 a group of female artists were of the same opinion and did a light installation to call for attention. Names of 19 women who would fit into Walhalla’s categories were shown on the wall. A male politician’s comment: “feminist infiltration”. Since then the share of women has raised from 5% to the above mentioned 6%. Not sure if I should say “yeah!” or “what?”. Anybody wants to talk about the glass ceiling?

It also feels kind of awkward to me that there are almost no female artists and no single female scientist is in the list:

I am not sure I want Germany to be represented like that. As a museum of how it used to be, yes. But as an actual hall of fame, rather no.

The center of attention: bust or artist?

When you look at the busts (see the picture on Wikipedia) you will see a difference in the way the newest busts are created. In the past the main goal was to portrait the person as accurately as possible. Therefore they look incredibly real.

But the newer versions are different. Now the artist’s handwriting clearly shows. Just look at Albert Einstein on the far right, almost contour-free. Or Adalbert Stifter, kind of strangely geometrical.

When an artist is doing art then it is a personal statement, a personal interpretation of his way of seeing the things. This is very important. But in Walhalla the idea was to show the portraits and not a personal opinion. I found it rather confusing that suddenly the artist was driving the impression so much.

The day had been very interesting and the weather simply marvelous.

Remember the girl from the castle? This is what it looked like at the Walhalla:

I am not totally convinced they were just using their phones to ask “why”.