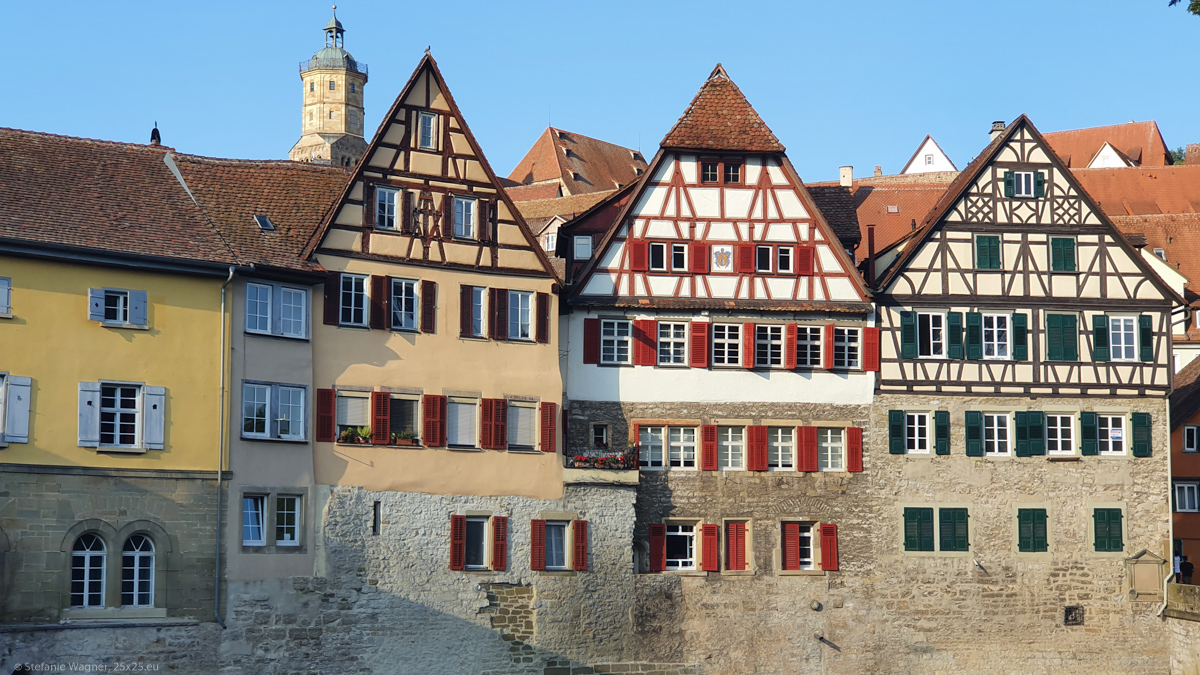 Imagine you are a beautiful old city. You used to be an important saline. But all you are known for today is that your name is the brand of a German savings and loan association. Even if you google yourself the links to this company will be ranked higher than links to the city itself. Time to pay Schwäbisch Hall a visit, a city that – until then – I only knew as a slogan.

Welcome to a cute city

Schwäbisch-Hall is simply a nice city. Walking their eases your mind and makes you relax.

Again going back in time

After discovering the oldest oldest city hall in Germany in Walldürn I came across another remarkable building. This time it is one of the oldest houses in Germany. According the information sign the frame structure of this house is from 1289!

Let’s look at the 13th century a little more closely.

2020 was the year of the Corona pandemic. Even though the incident numbers were quite low during the summer normal indoor events were not possible. In Schwäbisch Hall thinking differently was the new principle. Their motto of 2020 was “Everything differently” (“Alles Anders”). I like that approach. Instead of looking at what was not possible they had a lot of open air activities. Unfortunately this was something I haven’t expected and I wasn’t prepared to stay overnight so I couldn’t join the evening activities. But there was so much preparation going on and so much energy that you simply had to be positive (ok, and the perfect weather also helped).

Normal is still not attractive?

I unerstand that normal is not interesting enough to catch someones attention. However, I start to hate display dummies. Normally they just look totally bored which is annoying enough. To make a difference it seems like now it has to be more hysterical and exaggerated.

Please can we just get something that really invites us in instead of scaring us off?

On my way to and from the old part of the time I had to cross an old cemetery. Parts of it were still visible even though it looked like it was falling more or less apart.

A pile of tombstones indicated that they recently cleared part of the cemetery. I know that after the rental period of graves they get removed. But seeing it this explicitly was new to me. For me tombstones mean that there is a chance to be remembered and as long as you are remembered you are not dead. On the other hand, there needs to be space for all the new that comes. We need to accept the fact that we are just a drop in history. However, drops can be powerful so we should still live our life to the max.

This picture in an underpass touched my heart. I don’t know what the artist had in mind and maybe I was influenced by the graveyard but for me there is a deep sadness in her face. It is like she is saying good bye to something. I think it is remarkable to create such a picture with spray cans.

It was just a flying visit but at least now I know more about what was just a brand before for me.