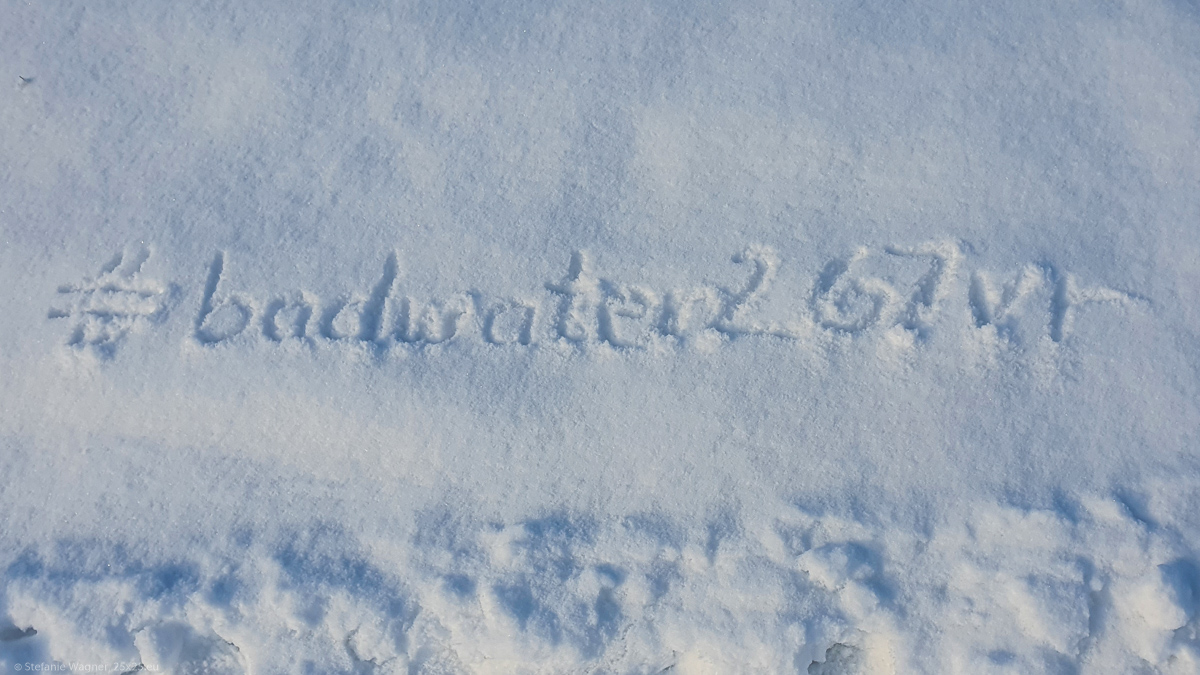 It is surprisingly difficult to write something about the area that you actually live in. There is so much to describe, so many memories. What to pick for a blog entry? That is why I will write about Passau and its surroundings in a separate area. This entry deals with a different kind of journey in times of the Covid pandemic.

Obviously traveling was not possible in January of 2021. Germany and Austria were in lockdown which for me meant no visiting of friends at all. Why? Because years back I made the decision to buy a house just across the border in Austria. I work in Germany, my friends are in Germany, my kids go to school in Germany. Just the house is on the other side of the border. Until Covid it didn’t matter at all because of the European Union. However, during a pandemic this fell apart pretty quickly and rules and regulations didn’t allow for any border crossing beside work or school.

In January the numbers were pretty high, schools were closed and I wasn’t to eager to go to an empty office anyway. Most my work could be done remotely. This also meant that my kids and I were cut off, ultimate social distancing. Even if you like to do things solo – at some point this does effect your mood. Therefore, I had to have some kind of distraction and I went for a different kind of travel.

I love to run. Depending on my schedule I do it sometimes more, sometimes less. For me it is like a form of meditation. The rhythm of my feet, my breathing. My mind starts wandering around and usually I come back mentally relaxed or with a new idea.

This is how running is like a mini trip for me. It helps me to get out of the rat race, get new perspectives.

Also running helps me to stay in shape. Sometimes I make… well… let’s say not the most intelligent decisions while traveling (e.g. here, here, and here). Therefore I would like to be fit enough to keep myself out of real trouble. Additionally, I still have a lot of squares to cover, means I need to get really, really old.

Now, having said this I need to make two confessions: I always was and always will be a slow runner. I discovered a nice hashtag that describes it all: #turtlespeed. That is me 🐢. That is why you will not see me in any competitions. Second confession: I am usually only outside when the weather is at least ok. Rain, snow, freezing temperatures – not me!

January – here we go to break both my rules: no competition and ok weather.

The son of my godfather is a crazy guy. He used to do all sorts of ultra stuff: set world ultra cycling records in high school (riding against the clock from San Francisco City Hall to Los Angeles City Hall). He completed the 3127-mile Race Across America bicycle race in less than eleven days, did various Ironman events and 100-mile snowshoe races in Alaska, to name a few. Now he has his own company organizing endurance events, especially the Badwater Ultra Cup, comprising Badwater Cape Fear, Badwater Salton Sea, and Badwater 135.

For obvious reasons 2020 made a lot of those activities impossible. So he decided to do a virtual event: the distance of all 3 ultra races together during the month of January by running, walking, crawling (quoting him). All those distances add up to 267 miles or 430 km. This means an average of 8.6 miles or ~14 km each day.

Until then I could only watch whatever was going on in the Badwater hemisphere. This was my chance to be part of it. So I signed up, even though I very rarely ran 14km until then. There was no time limit, only my pride to swallow to be one of the slowest in the field.

My thought was that this challenge would keep me busy beyond work, have me focused on a new experience, and show me were my limits are. Spoiler alert: oh yes, it did.

Once the decision was made, it was crystal clear I had to figure out how to do. It was this point of going from “I would like to do this” to “I am determined and it is going to be my top priority”. To make sure this was going to work out I needed a plan.

A quick check showed me that all movement (steps during the day, walking, hiking, running, etc.) my smartwatch reported in 2020 maxed in August with roughly 325km (200 miles). 100km more should be possible somehow. Just not all by running.

Some test runs during December revealed that 5km are easy to run, 10km are ok but I would feel my legs, 15km would be a little challenging. I could do them once but not every day in a row. I would need a combination of walking and running. Best I would split things up where possible, do one part in the morning, the other part in the afternoon.

I knew it would take a lot of time. Therefore, I had to make sure I cover a good portion of the distance during my Christmas vacation in the first 1.5 weeks of the challenge in January. I wanted to have a cushion to account for anything that could prevent me from making my km later during the month.

The power of the goal

I broke January down in weeks and at the beginning of each week I set a weekly goal. Once this goal was set the only thing I thought about was how to get there. I didn’t doubt the goal or renegotiated it with myself. Anything else had to wrap around this goal. Of course, I still had to work after my vacation. The strategy was to book meeting time with myself to make sure there was enough time blocked. I shifted work into the evening and reduced my overtime account. At the weekend my kids sometimes had to eat on their own (they are old enough to be fine with that). Having a tidy house wasn’t high on the list in January. Who would see it anyway with no visitors allowed?

I made an assumption on how I could divide this weekly goal into daily smaller goals. Those were negotiable to some extent. However, I knew if I wouldn’t make the distance on one day it would mean a lot more the next couple of days. If you are already close to your limit you know that you don’t want to procrastinate here.

Therefore, the biggest decision every day would be how much of this distance I would cover by walking and how much by running. Once you break a big goal down like this it gets fairly easy. You can put all your energy in figuring out the “how” and you stop thinking about the “what”.

Every day I would add the covered distance into the sheet and see exactly were I was and if I was still on track.

You could call that crazy or nerdy or whatever. But this transparency really helped me to stay on track. I couldn’t lure myself into thinking I just cover the distance tomorrow. I knew I would see this line dropping immediately. If you ever heard of Agile Software Development you know where I am coming from with the idea of transparency, inspection, adaption, the overarching product goal (430km), the iterations, the iteration goals. My daily business as an Agile Coach. Just the first time I used it so extensively for private purposes. I can only recommend it. It unleashes a great amount of focus and energy not just in a business context.

At the end I would have had 2 more days available. But I really wanted to finish it because the weather was getting worse (again) and I was really tired of fighting with the elements.

It was like some weather god decided to go mad at me. Yes, there had been years with a lot of snow. However, the past couple of years we just had snow once in a while. My hope was, it would be the same in this January. Just a little bit of snow and that’s it. I was so wrong. After the first couple of days it started snowing and never really stopped until the end of January. I live outside of the city which means that it would take a long time for roads to get cleared (if at all).

On some days the decision whether I would run a walk were fairly easy. Running was just not an option.

One day it was so slippery with ice below the snow that even a milk truck couldn’t make it up the hill. It stopped with spinning wheels only to slide backwards down the hill again. It ended up off the street. On that day I fell three times while walking. No fun.

At the end of the month everything was suddenly melting and puddles would make it a little more difficult, especially at night.

In between it felt like the challenge was not so much the distance but how to cover it during this weather and with less daylight during winter.

Discovering my own home

Typically there is this one round I am running. Sometimes I take a shortcut, sometimes it will be the full round. But this was not possible at that time due to the closed borders. No crossing allowed. I had to look for different routes to take. Also it would get boring if you do the same route every day. I managed to find a lot of paths I never took until then. Here are some impressions of what I came along.

Every day I looked around for something new, something interesting, something beautiful. And almost every day I found something. If you purposely look out for new impressions it feels like traveling, even if it is just around the corner of your home. Try it out for yourself. Imagine you would need to post one interesting picture every day. You will be a lot more attentive than usual and recognize things that you would normally miss.

A challenge like this really keeps your mind busy. There was not a single day in January that was boring. Ok, sometimes it was nerve-racking to see the bad weather forecasts coming in. There might have been a day or two where I was really frustrated. But whatever – mission accomplished (not even as the last one in the field), with around 2/3 in running and 1/3 in walking.

My takeaways from this adventure:

Would I do it again next year? Maybe. The activity as such was fun and really helped my through one lockdown month. I would just prefer to not have in January. It gets dark early which makes it very difficult to accommodate the activity with working hours. Additionally the weather can be a bigger challenge than the run itself which leads to even more needed hours and some frustration.

However, if you cannot travel and you feel like you desperately need to get out, such an activity is perfect to keep you and your wanderlust mind busy.

PS: Just in case you wonder if this is advertising – I was as a regular paying participant, just like all the others. There are a lot more virtual running events out there, just search them on the internet.