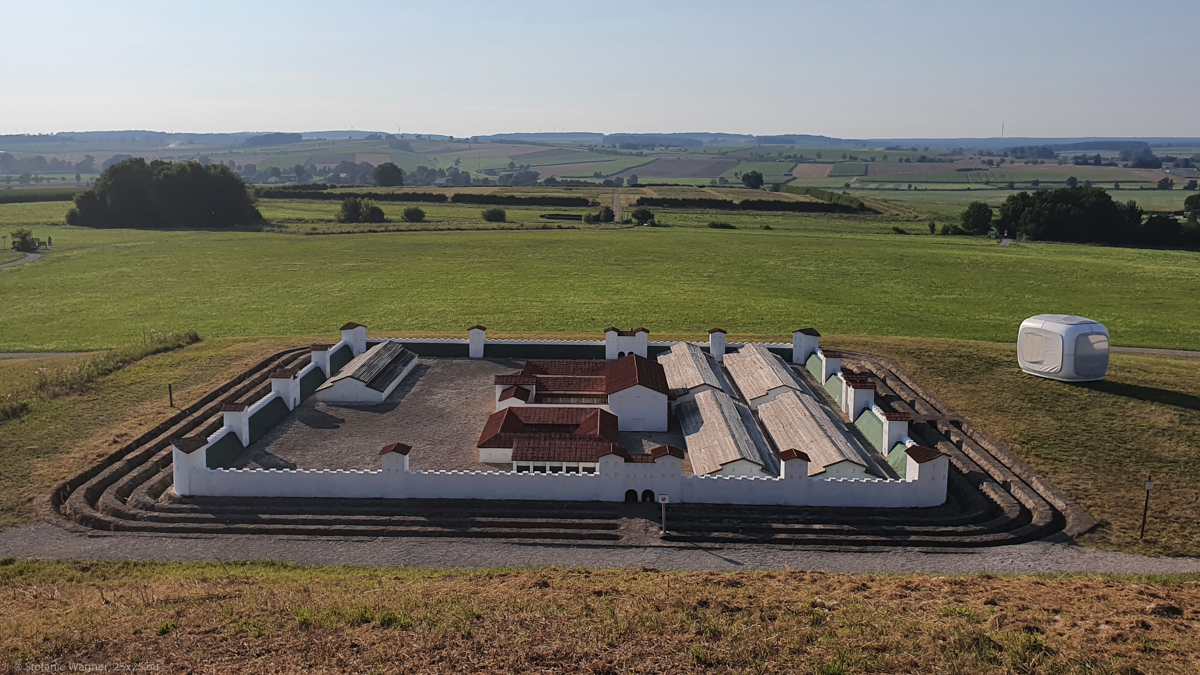 The Limes as a border fortification was not intended to ward off major attacks and was also mostly unsuitable for this. It should primarily ensure the control or channeling of the daily movement of goods and people and the rapid transmission of messages between watchtowers. To ensure safety there were large, always combat-ready units at strategic points that would fight invaders along the Limes. One of those units were located at the Fort Ruffenhofen.

This site is quite unique. It has the area of the fort itself and a museum. And both feel like they are in the middle of nowhere.

However, the town is quite creative to attract visitors. For example they have a free of charge camp ground for camper vans right next to the museum. They have a tent-like cubicle to sleep (not free of charge). The visit of the fort is free and comes with an app that gives you an impression of how the area looked like during Roman times. They have a model to show you what it was like.

Showing something that is not visible

The special difference between other Roman archeology parks (e.g. Xanten) and Ruffenhofen is that they didn’t excavated the remains but indicate the layout of the whole site by using different plantation. The idea is to preserve whatever is still there. Since this area was never built over, you can still retrace all the floor plans.

The outside walls are indicated by hornbeam hedges, the inside buildings by higher grass.

This is quite an interesting way to get a feeling for dimensions if the actual buildings are not there.

Finding something that is not visible

This used to be agricultural land. If nobody digs here how would you find out that there is a full fort below the surface? Information at the site and in the museum gave good insights and made me feel like a little child who wants to become an archaeologist. After getting to know the concept of dendrochronolgy this was the next cool thing to learn. The answer lies among other things in aerial archeology. Remains and ditches change the way that vegetation grows.

Something like a wall will lead to less growth, whereas a ditch will lead to more. If you take a picture from above you might be able to see structures that used to be here.

Once you found an area that might be of interest you can use geomagnetic prospection. Here, the relative change in the earth’s magnetic field is measured using special devices and an image is generated by using the data gathered.

This is totally unrelated to the whole topic but it was so funny to watch that I have to mention it here. Just before I came they had mowed the lawn around the museum so the grass was short now. This message had not yet been delivered to the mouse families living there, more specifically the common voles. You could see their “highways” and they were racing all over the place in and out of their holes.

The lady at the museum’s cash desk had the perfect view through large windows. She told me it was like watching television for her. As this visit happened during the summer of the Covid pandemic there were not many visitors here and so she had to keep herself busy with other things, e.g. watching the voles.

I would assume the frequency did drop once the birds of prey discovered the buffet. But until then it was fun to watch.

Ok, typically traveling with a camper van or a trailer has nothing much in common with whatever they present you in the ads. But once in a while it is actually just like that.