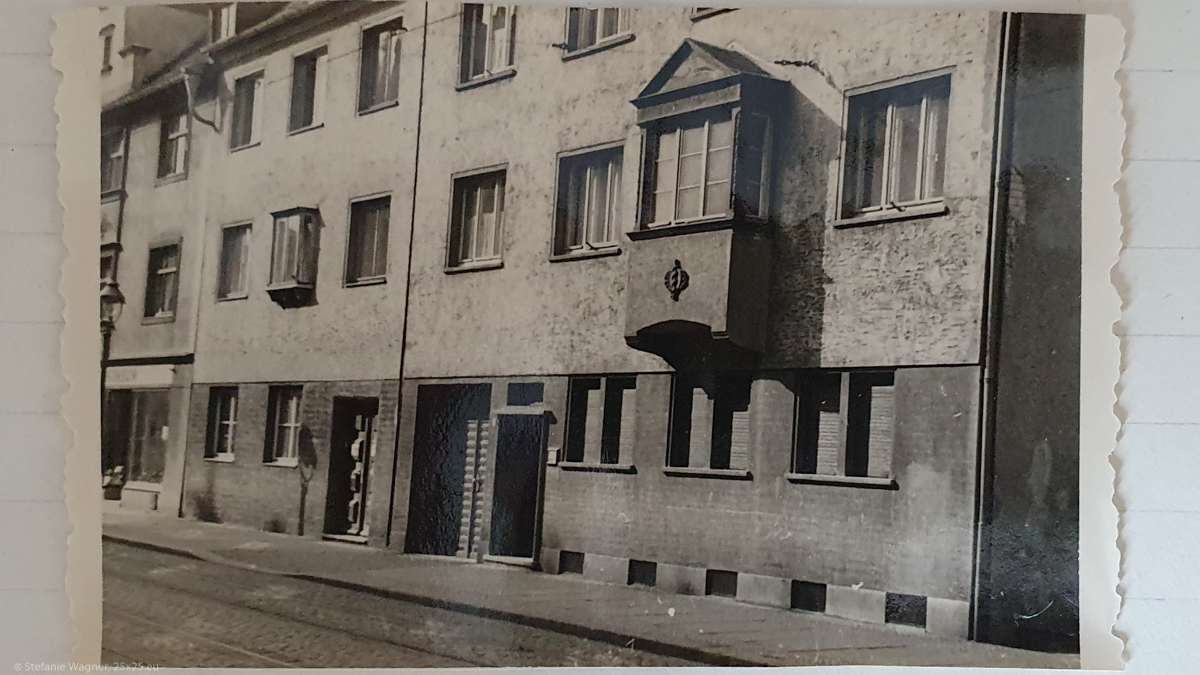 Just like when I went to Wertheim to see where my mum grew up or going to Kaliningrad and Danzig to follow the steps of my grandmother, I now went to Halle/Saale to see where my dad spend some of his childhood days. A real dad-daughter trip. It was a lot of fun to hear the stories about what it looked like when he was a child and how he remembered everything.

We found the house and it looked almost the same as it did years back after the war. Even the wooden entrance door was the same. Just more cars along the street today.

The Halle State Museum of Prehistory had the Nebra sky disc on display when we visited it. This was obviously a highlight for me being so interested in the disc and having visited its discovery place already before. What I didn’t expect was such an informative exhibition beyond the disc. E.g. finding out how the direction of bodies in graves changed over time and the differences in the positions between women and men. I saw the original dolmen goddess, learned a lot about the weapons and tools in the Iron Age, saw the skeleton of a mammoth found in the area. If you are into such things, this museum is definitely for you.

After the German reunification the already struggling economy in Eastern Germany struggled even more when a lot of companies shut down and people moved to other parts. There are still very interesting houses waiting to be rediscovered. Too bad everything around construction is so expensive today that most probably they will just fall into disrepair and then be torn down.

Halle has a big graveyard (“Stadtgottesacker”) that is known for its arcaded sidewalks. While we were walking along those I saw a vase with a very unusual engraving.

The person addressed with that engraving already passed away 15 years ago. Still somebody put the vase here today with flowers. I wonder what the story behind this is.

There are unusual churches in the world, like this split church. And there are impressive ones, like the Sagrada Familia in Barcelona or St. Stephen’s Cathedral in Passau. They are obviously different. However, sometimes churches can be very different without showing it.

The Market Church in Halle today is like a puzzle created out of two churches. On the following picture you can see two churches plus the Red Tower. Around 1529 the cardinal decided that a bigger, more prestigious church is needed. And this is when the puzzle began.

According to the information in the city museum of Halle (also a place I can recommend if you are interested in something like this) they first demolished everything but the towers of the church on the right. Then they extended the church on the left to round up with the remaining towers. Now this church had partially an old structure and partially a new one. So they demolished the old part but kept the roof and the towers. Finally they rebuild the missing piece in the middle of the newly created church to have it all stitched together again.

And this is why the Market Church has two pairs of towers that look totally different.

Ok, I am guilty of sometimes making conclusions too fast and mixing some prejudices into those. When we saw the street name “Lu-Wu” I thought that this was some Chinese person who had relations to Halle most probably during the communist area. Well, I was so wrong.

We asked a resident who just came out of the door while my dad and I were talking about the name and found out that it was just an abbreviation for Ludwig-Wucherer-Street. I can’t remember that I ever saw a street name shortened like that. Funny.

Art in the backyard

Sometimes you find art in the craziest places. In the parking lot of the hotel there is a big wall painting. It resembles the old monumental paintings on ceilings. We asked the receptionist about it and they had a full paper about it.

This painting imitates such a ceiling, which is why the figures at the top are upside down. A lot of the depicted people have connections to Halle. Incredible to find something like this so hidden in a backyard. Kind of tragic – the stairs on the left should symbolize a potential passage to the next building. And they anticipated more paintings to come in the future. The description is from 1997 and as you can see there is no other painting next to it. Just this painting that spalls.

As I already wrote in another post plants really have to be strong in my house and my garden. No “green thumb” here. I am always surprised to see how plants can survive in very challenging areas. I found one of those on Giebichenstein Castle.

Those plants at the castle have been planted deliberately to protect the wall decks against heat and frost. Until now I thought that plants on old walls are problematic as their roots destroy the composite. Maybe I should try those in my garden.